Rosarians to knight Packy the elephant 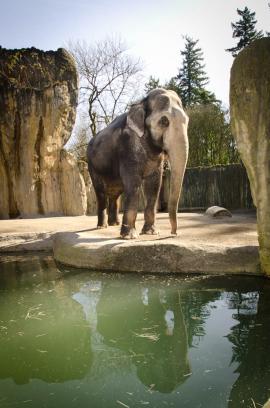 Already revered by Oregonians and animal lovers around the world, Packy the elephant is getting a boost on the social ladder this week. On his 50th birthday, the famous pachyderm will be knighted by Portland's Royal Rosarians – making him "Sir Knight Packy" to us commoners. The knighting will take place April 14 at the Oregon Zoo, as part of a daylong celebration of Packy's 50 years.

"We are very pleased to honor the Oregon Zoo and Packy the elephant on his 50th birthday with a ceremonial honorary knighting," said Rob Hungerford, Royal Rosarians prime minister. "We recognize Packy's importance to the zoo and its world-renowned elephant program – as well as the great love that our community holds for this special elephant."

Packy will be knighted under the rose Super Star in a brief ceremony presided over by Hungerford and reigning Rose Festival Queen Lamarra Haynes – just after the 6-ton elephant chows down on his cake at 2 p.m. Zoo director Kim Smith will accept the traditional knighting medallion on Packy's behalf.

"Packy has been inspiring people to care about elephants for half a century," Smith said. "It's only fitting to celebrate the elephant who started it all."

In being knighted by the Royal Rosarians, Packy will join such illustrious figures as John Philip Sousa, Jimmy Stewart, Betty White, Bob Hope and even Mickey Mouse. Another Rosarian honoree, KGW news anchor Tracy Barry, will serve as emcee for Packy's birthday festivities. Barry was knighted as a Dame of the Realm by the Rosarians in 2001 under the rose Sheer Bliss.

While the knighting ceremony will certainly be a unique experience, it is just one of many ways that Packy will be honored on his special day. View the full party schedule, along with information about Packy's history, the zoo's elephant herd, 50 ways to celebrate Packy's 50th, and Packy-themed activities taking place across the city.

The big event happened shortly before 6 a.m. on April 14, and news about the 225-pound baby spread rapidly. Newspapers and radio stations around the world announced the birth, and Life magazine covered the event with an 11-page spread describing "The Nativity of Packy." Gifts flooded the zoo – everything from gold-plated safety pins to hand-knit baby clothing – and visitors flocked to see the new pachyderm. Watch some vintage color footage from the time of Packy's birth below.

By proclamation of the mayor, the Royal Rosarians serve as the official greeters and ambassadors of goodwill for the City of Portland and the Portland Rose Festival. Dedicated to community service through the charitable arm of the Royal Rosarian Foundation, they honor a legacy of tradition with rich pageantry and ceremonies from the mythical realm of Rosaria.

The zoo is a service of Metro and is dedicated to its mission of inspiring the community to create a better future for wildlife. Committed to conservation, the zoo is currently working to save endangered California condors, Columbia Basin pygmy rabbits, Oregon silverspot and Taylor’s checkerspot butterflies, western pond turtles, Oregon spotted frogs and Kincaid’s lupine. Other projects include studies on black rhinos, Asian elephants, polar bears and bats.