Trail Blazers' rookie Damian Lillard isn't the only local hoops star to make a splash this season. Oregon Zoo marine life keepers say Eddie the sea otter can dunk with the best of them and just might have the highest shooting percentage in town.

Jenny DeGroot, the zoo's lead sea otter keeper, began training Eddie to put a ball through a plastic basketball hoop last year as a way of exercising the aging otter's arthritic elbow joints. Now, she says, the playful marine mammal is so good he rarely misses a shot.

Zoo veterinarians discovered arthritis in Eddie's elbows last year after he and Thelma, his longtime Steller Cove companion, were trained to undergo voluntary X-rays on a routine basis. The vets prescribed regular exercise as a way to improve Eddie's joint function, but that recommendation presented a challenge for keepers.

"We had to get creative," DeGroot explained. "There aren't many natural opportunities for Eddie to work those arthritic elbow joints, because sea otters don't use their front limbs to swim — they swim by moving their back legs and flippers. So training him with the basketball hoop was a way to get Eddie using those front limbs more regularly." 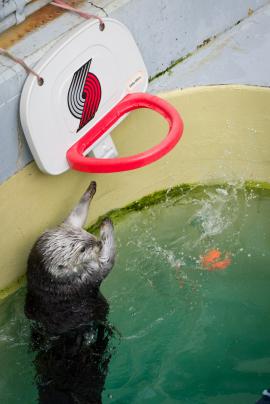 Eddie's athletic exploits take place off-exhibit, in a behind-the-scenes training pool connected to the zoo's Steller Cove habitat via underwater tunnel. Although a newcomer to basketball, Eddie is 15 years old, which is considered geriatric for a sea otter. His fur, once a rich brown over his entire body, has turned creamy white around his face and neck. Still, keepers say age hasn't slowed him down much and he seems to enjoy the exercise — as well as the fishy treats he gets whenever he scores.

"He's definitely got game," DeGroot said. "Sea otters have incredible dexterity, so it makes sense Eddie would have this hidden talent. They're famous for using rocks as tools to crack open clams."

Besides shooting hoops, Eddie also receives daily doses of vitamins and anti-inflammatory medication — some administered via capsules concealed inside fish, the rest simply accepted voluntarily thanks to positive-reinforcement training.

"We train the otters in a lot of behaviors geared toward their daily care, like allowing us to brush their teeth and check their gums," DeGroot said. "Eddie presents his eyes for drops twice a day. Getting the animals to participate voluntarily greatly reduces their stress when we need to administer medical treatment."

Keepers think Blazers coach Terry Stotts — who majored in zoology at the University of Oklahoma — might appreciate Eddie both for his hoop skills and his ability to inspire sea otter conservation. Considered a keystone species, sea otters play critical role in the Pacific Coast marine ecosystem, promoting healthy kelp forests, which in turn support thousands of organisms.

Eddie and Thelma have lived at the Oregon Zoo since 2000, on long-term loan from the U.S. Fish and Wildlife Service. Both otters were rescued off the coast of California, where they had been abandoned as pups in 1998. Lacking the skills to survive on their own in the wild, they were taken to the Monterey Bay Aquarium for rehabilitation but were eventually deemed non-releasable.

Sea otters, which are listed as threatened on the Endangered Species list, once ranged along the north Pacific Rim from Japan to Baja California, including along the Oregon coast, and are thought to have numbered between 150,000 to 300,000 animals. Prized for their soft, luxurious fur, the animals were hunted to the brink of extinction during the late 1800s and early 1900s. By 1911, aggressive fur-trapping campaigns had reduced the global sea otter population to around 2,000.

Although now protected against trapping, sea otters are threatened by oil spills, fishing nets and infectious diseases. Biologists estimate the population has dropped by 50 percent over the past 30 years. Wild sea otters have not established colonies off the Oregon coast since 1907, though a few individuals have been sighted, most recently in Depoe Bay in 2009.

Learn more about the Oregon Zoo's sea otters and how to help protect sea otters in the wild.