More than 20 western pond turtles returned to their home ponds in the Columbia River Gorge this morning — the latest release in a 25-year collaboration aimed at helping this yellow-speckled local reptile survive.

For 14 of these turtles, reared at the Oregon Zoo, an 11-month stretch of warm days and nights has just drawn to an end. Since last May, the turtles basked in the warmth and light of a simulated summer in the zoo's conservation lab, growing large enough to have a fighting chance in the wild.

But this year, there were nine additional turtles — and some new helping hands — at the release site. 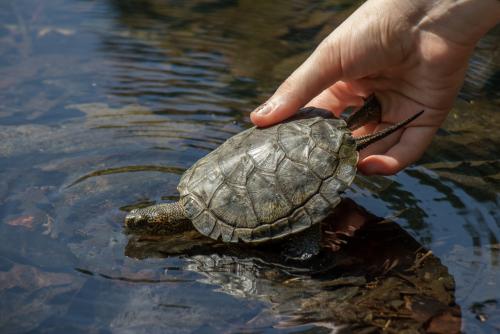 In addition to participating in the head-start program, the zoo has been treating adult turtles from the Gorge affected by a severe shell disease. Conservation technicians from Larch Corrections Center support that veterinary work, serving as an infirmary for the recovering reptiles, and providing daily care, observation and minor treatments.

All nine of these adult turtles were deemed fit for return to the Gorge, and for the first time, caregivers from Larch were able to participate in the release.

"We have a running relationship with Larch, but this is the first time they have been part of the final step of turtle recovery," said Dr. David Shepherdson, Oregon Zoo deputy conservation director.

Larch, a minimum-security prison in Vancouver, Wash., with the motto "Doing Good While Doing Time," is part of the Sustainability in Prisons Project — a partnership between the Washington Department of Corrections and The Evergreen State College. Larch also grows narrow-leaf plantain — a food source for the federally endangered Taylor's checkerspot butterflies raised at the Oregon Zoo.

"Sustainability in Prisons brings together people who haven't felt included in the conservation movement before," said Joslyn Trivett, the project's national network manager. "It makes conservation the business of a wider group."

Western pond turtle work is a particularly noble cause. The species — one of only two native turtles in the Pacific Northwest — has lost significant ground over the past two decades. Once common from Mexico all the way up to Vancouver, B.C. (where it's now extinct), these turtles are considered endangered in Washington and declining in Oregon and California.

The main issue seems to be invasive freshwater predators like non-native bass and bullfrogs, which eat the turtles when they're young. In 1991, WDFW and the Woodland Park Zoo stepped in after surveying just 150 western pond turtles living in two ponds in the state. The Oregon Zoo joined the effort seven years later, take part in a "head-start" program — taking in wild hatchlings and letting them develop in safety for about a year.

"After that, the young turtles can avoid most predators that threaten them, such as the bullfrogs," Shepherdson said.

"We've been doing this for 20 years now, and we feel we've been successful in preventing extinction," Shepherdson said. "We've made the first step toward recovery — but we're not there yet."