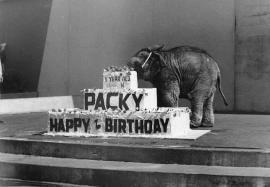 In preparation for Packy’s 50th birthday celebration April 14, the Oregon Zoo is seeking the public’s help in tracking down and sharing early memories of the beloved pachyderm.

Packy, a Portland icon, made international news in 1962 as the first elephant born in the Western Hemisphere in 44 years. The big event happened shortly before 6 a.m. on April 14, and news about the 225-pound baby spread rapidly. Newspapers and radio stations around the world announced the birth, and Life magazine covered the event with an 11-page spread describing “The Nativity of Packy.” Gifts flooded the zoo – everything from gold-plated safety pins to hand-knitted baby clothing to an elephant-sized quilt – and visitors flocked to see the new pachyderm.

As Packy’s 50th birthday approaches, the zoo is working to preserve his history and would like to augment its visual records from Packy’s early years.

“We know visitors love Packy and the rest of the zoo’s Asian elephant herd,” said Kim Smith, zoo director. “We’re hoping some of their experiences from the past 50 years are saved on film, and that they’re willing to share memorabilia and stories with us. I’d especially love to hear from anyone who knows about Packy’s quilt.”

Smith said a visitor told her about a quilt that had been made for Packy when he was a baby, and she is hopeful someone can supply more information, pictures of the quilt, or perhaps even the quilt itself. The zoo is also seeking old home movies, film footage, slides, photos, postcards, View-Master reels, newspaper clippings, magazine articles or other memorabilia relating to Packy’s early years.

The zoo hopes to display some of these materials during Packy’s birthday celebration and eventually place them in a permanent historical archive. Copies will be accepted in addition to original materials. Donations may be sent to the Oregon Zoo, 4001 SW Canyon Road, Portland, OR 97221, in care of Packy’s Birthday.

The zoo is also seeking stories from or about anyone who shares a birthday with Packy (April 14, 1962) – same date, same year or both. Stories and remembrances may be posted to the zoo’s Facebook page, emailed or sent to the Oregon Zoo using the above address. The zoo may use some of these stories on its website or to help publicize the April celebration.

Packy is now the oldest male Asian elephant in North America, and one of the largest, standing 10 feet 6 inches tall at the shoulder and tipping the scales at around 12,500 pounds. He has fathered seven calves, including 28-year-old Sung-Surin (“Shine”) and Rama, both of whom currently live at the zoo.