Condors on track for another egg-ceptional year 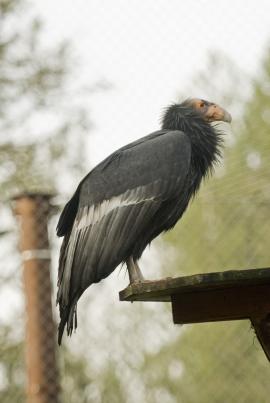 California condors at the Oregon Zoo’s Jonsson Center for Wildlife Conservation are laying the groundwork for species recovery one egg at a time.

Six eggs have been laid so far during this year’s condor-breeding season, with perhaps a couple more still to come. The two most recent eggs arrived on Feb. 16 (laid by Ojai) and Feb. 18 (laid by Squapuni). The condors and their mates will sit on them for up to two weeks before keepers remove the eggs to determine whether they are fertile.

“We’re proud to be making a contribution to the California condor’s comeback,” said keeper Kelli Walker. “Each new egg is critical to the survival of this species.”

The fourth egg of the season arrived on Feb. 8 with a bit of drama. The parents, Mali (male) and No. 174, squabbled over the new egg as soon as it had been laid. Keepers quickly pulled the egg from the nest room to prevent any damage, replacing it with a dummy egg. According to condor keeper Kelli Walker, Mali had been harassing No. 174 before she laid the egg and continues to be somewhat aggressive toward her in the nest room. She said the birds will probably not be given a chick to rear this season, and they will likely be split as a breeding pair due to ongoing problems dating back to 2006.

Earlier the same day, Walker had pulled the season’s second egg to test its fertility and noticed what appeared to be a small hole in the egg’s shell. After treating the area with sterile water and a diluted antiseptic, Walker used a thin layer of white glue to cover it. Despite the defect, the egg did prove to be fertile and Walker is hopeful her repair will ensure a normal hatching. The parents, Timocho and Willie, are doing extremely well with incubation and egg-sitting duties, Walker noted.

Through a process called candling – which uses a bright light source behind the egg to show details through the shell – Walker has already determined the first four eggs of the season are fertile. These eggs are now in an incubator, and the condor parents are sitting on dummy eggs. When hatching begins, usually in 54 to 58 days, Walker switches the real eggs back, so that the chicks can hatch under their parents. The conservation center should see its first chick of the season toward the end of March.

The California condor is classified as a critically endangered species. In 1982, only 22 individuals remained in the wild. With the help of breeding programs like the Oregon Zoo’s, condor numbers now total around 390, counting those in programs and in the wild.

Thirty healthy chicks have hatched at the Jonsson Center since the program began in 2003. Around 20 Oregon Zoo-reared birds have gone out to field pens, with most released to the wild. Last year, three eggs laid by Oregon Zoo condors were placed in wild nests to hatch.

Accumulated lead poisoning – a problem that plagues all raptors and scavengers – is the most severe obstacle to the California condor’s recovery. As the birds feed on carrion and other animal carcasses shot by hunters, they can unintentionally ingest lead from bullet fragments. Lead consumption causes paralysis of the digestive track and results in a slow death by starvation. Lead also causes severe neurologic problems, so the birds not only starve but suffer from impaired motor functions. For hunters who wish to reduce their impact on raptors, including the federally protected golden eagle, zoo officials recommend choosing non-lead ammunition.

The California condor had a long history in Oregon. Lewis and Clark saw the large birds as they traveled along the Columbia River. Local archaeologists have unearthed 9,000-year-old condor bones from Native American middens, and condors were a common motif for the designs of Oregon’s Wasco people, who lived along the Columbia River between The Dalles and Cascade Locks. The “Thunderbird” was considered a spiritual guide to the native peoples and is a key character in many myths.

The last condor seen in Oregon was near the town of Drain in 1904. The birds held out a little longer in California, but by 1987, the last condors were taken into captivity in an attempt to save the species. Biologists decided to place the remaining condors in a captive-breeding program. The California condor was one of the original animals included on the 1973 Endangered Species Act.

The Oregon Zoo’s condor recovery efforts take place at the Jonsson Center for Wildlife Conservation, located in rural Clackamas County on Metro-owned open land. The remoteness of the facility minimizes the exposure of young condors to people, increasing the chances for captive-hatched birds to survive and breed in the wild.