Sweet-tempered rhino was a favorite of zoo staff and visitors 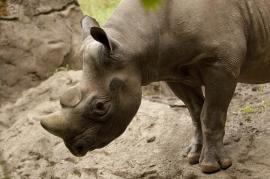 Pete, a 24-year-old eastern black rhinoceros and one of the most popular animals at the Oregon Zoo, was euthanizedtoday due to advanced kidney failure.

“This is a very sad day for everyone who knew Pete,” said zoo curator Michael Illig, who was Pete’s original keeper when the rhino arrived here more than 20 years ago. “He may have looked tough, but he was really one of the calmest, most sweet-tempered animals I’ve ever known.”

“I remember when he first got here,” Illig said. “I slept in the rhino barn and hand-fed him for a few days until he got used to his new surroundings. Black rhinos can range from very nice to not very nice, and Pete was just one of the best ever.”

In 1990, Pete was joined by Miadi, a female rhino who became his mate until her death in 2005. The pair had a female calf, Imara, in 1997. Imara, who now lives at the Great Plains Zoo in Sioux Falls, S.D., has since given birth to two calves, one female and one male.

Illig said Pete had been struggling recently with chronic kidney disease. Since there is no effective way to counteract this condition in rhinos, veterinarians focused on maintaining Pete’s comfort, as well as correcting electrolyte abnormalities and treating skin sores caused by the kidney disease. Over the past several days though, animal-care staff noted a marked decline.

“His skin condition deteriorated, he was retaining fluids and had difficulty breathing,” Illig said. “It was clear he was suffering, and there was nothing more we could do to help him.”

Veterinarians believe Pete’s kidney problems stemmed from hemochromatosis, a pathological disorder that causes the body to absorb too much iron.

Pete’s sweet disposition made him a great ambassador for his species, Illig noted, and the zoo’s rhino barn was always a favorite stop during behind-the-scenes tours, where over the years thousands of people got to see Pete up close and pet him.

“Black rhinos are some of the most endangered animals on the planet,” Illig said. “In November, the western black rhino was officially declared extinct, and overall the species is in serious danger of extinction.”

Habitat loss and poaching have caused the world population of black rhinos to plummet from an estimated 65,000 in 1970 to fewer than 3,700 today, Illig said.

Last April, the Oregon Zoo welcomed Zuri, a 3-year-old female rhino from Cleveland Metroparks Zoo. Keepers had hoped Pete and Zuri would produce offspring to boost the number of the highly endangered species. Zoo officials say they will look for another male to be paired with Zuri.