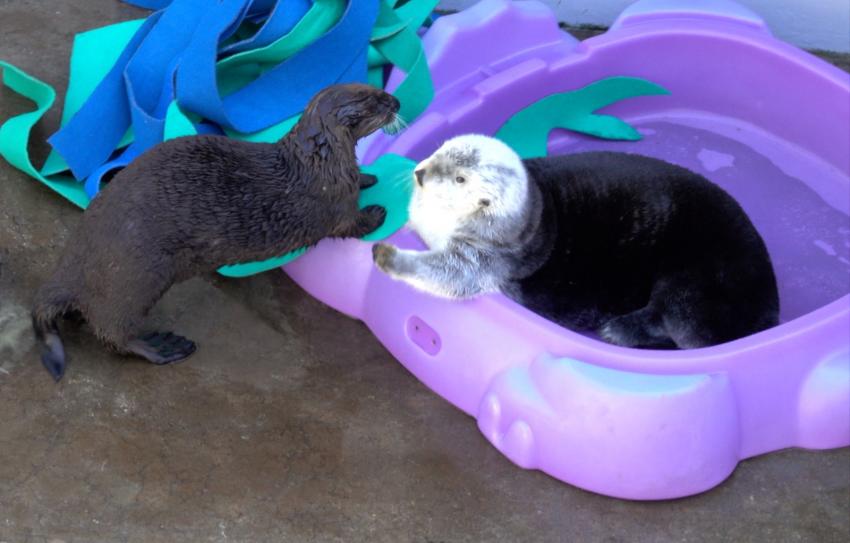 Oregon Zoo visitors might notice more splashing than usual at the Steller Cove habitat this month. The zoo's geriatric sea otter, Eddie — who turned 20 last month — is hanging out with 6-month-old Lincoln now, and keepers say the pup's youthful exuberance should help the older otter stay active in his golden years.

Lincoln, who has spent time with Juno for the past few months, met Eddie for the first time over the weekend, and keepers say the two are getting along well. After briefly checking each other out, the two dove into a behind-the-scenes pool together for a playful wrestling session.

"We thought Lincoln might avoid Eddie at first," said Nicole Nicassio-Hiskey, the zoo's senior marine life keeper. "But the exact opposite happened. He swam directly over to Eddie and went right up to him."

Lincoln, who arrived at the zoo Dec. 8, was orphaned along the California coast last October when he was less than 2 weeks old. He was taken in by the Monterey Bay Aquarium's rescue and care program, but — unable to be paired with a surrogate mom — he was eventually deemed non-releasable by the U.S. Fish and Wildlife Service.

Although Lincoln has grown quite a bit since December, he is still small compared to Eddie, who at nearly 70 pounds is more than twice his size. Lincoln now weighs around 28 pounds and has rich brown fur over his entire body, whereas much of Eddie's coat has turned creamy white with age.

"Having a youngster around should be rejuvenating for Eddie," Nicassio-Hiskey said. "Male sea otters seldom live past 15 years, so Eddie's among the oldest of his kind. Lincoln is definitely faster than he is. They'll play and wrestle for a while, then Eddie will get tired and go take a nap in his ice pool. We have a lot of really old animals here, so we focus quite a bit on geriatric care."

In 2012, animal-care staff trained the aging otter to dunk a toy basketball as therapy for his arthritic elbow joints.

Sea otters are considered a keystone species and a play critical role in the Pacific Coast marine ecosystem, promoting healthy kelp forests, which in turn support thousands of organisms. Though currently protected from hunting by the Marine Mammal Protection Act of 1972 and the Endangered Species Act of 1973, sea otters continue to be threatened by oil spills, fishing nets and diseases.

To learn more about the Oregon Zoo's sea otters and how to help protect the species in the wild, visit oregonzoo.org/discover/animals/southern-sea-otter.