Samson marks his birthday with a stroll, swim in Elephant Lands 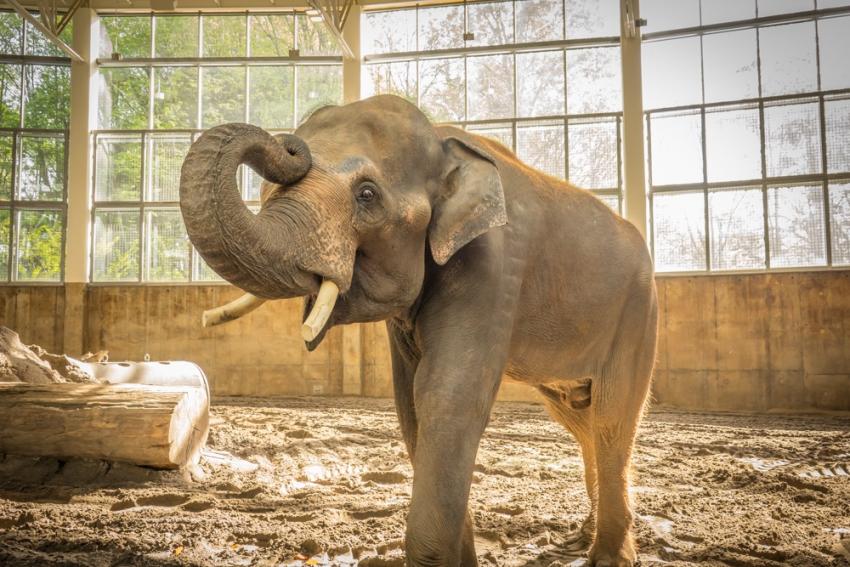 Samson, the newest member of the Oregon Zoo elephant family, is having a big birthday. He celebrated his 20th year this morning with his first trip into Elephant Lands' south habitat — exploring the grounds, checking out some interactive feeders, and topping it off with an inaugural dip in the pool.

The birthday stroll took place while the rest of the herd was in another part of Elephant Lands, and before the zoo opened to visitors. Samson's been behind the scenes since arriving at the Oregon Zoo last month from ABQ BioPark Zoo in Albuquerque, N.M., acclimating to Elephant Lands and getting to know his keepers.

Everyone who's cared for the 8,000-pound pachyderm so far has remarked on his calm, easygoing demeanor.

"He's so good-natured," said Bob Lee, who oversees the Oregon Zoo's elephant area. "He's taken to our staff really quickly — his caregivers in Albuquerque did such a great job working with him."

The largest, tallest member of the elephant family, Samson is acclimating quickly to his new home. Keepers say he's very engaged and social, and he loves to relax and play with tractor tires, his favorite toy.

Samson has just begun to explore more of Elephant Lands, starting with Forest Hall earlier this week and moving on to the mud flats, hilly terrain and swimming pools of the South Habitat. After dipping a toe in to test the water, he splashed into the 160,000-gallon pool, snacking on birthday treats of apples and sweet potatoes and spraying water with his trunk.

Samson will continue to stay behind the scenes most of the time, as caregivers gradually begin acquainting him with the other elephants, but visitors to the zoo might catch a glimpse of him in Forest Hall or the South Habitat as early as next week.

As if all of that excitement wasn't enough for a 20th birthday, Samson has one more thing to celebrate today: his third calf was born this morning in Albuquerque to ABQ BioPark's Rozie.