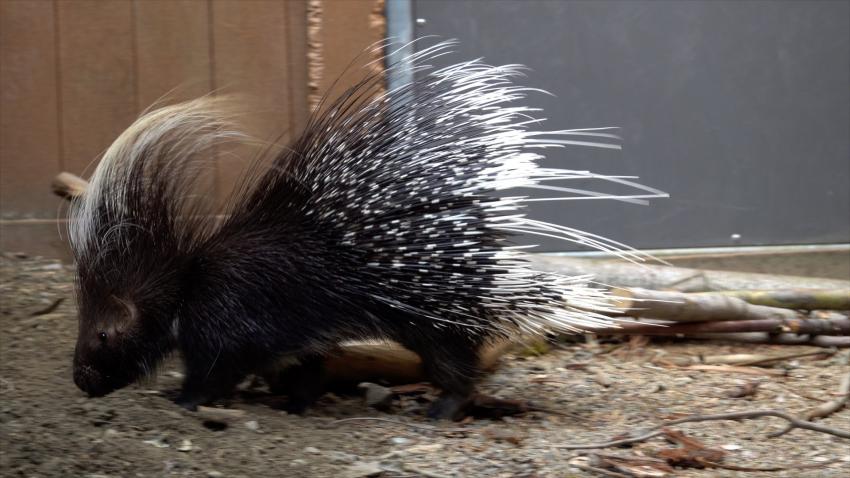 Sometimes you have to make the best out of a prickly situation. After more than a year and a half on the streets of Spanaway, Wash., a rare Cape porcupine has found a temporary home at the Oregon Zoo. The bright-eyed, sharp-quilled rodent, native to Africa, has briefly taken up residence behind the scenes at the zoo's veterinary medical center.

"We were very surprised to learn that an African porcupine was wandering around a neighborhood in Washington," said Becca Van Beek, who oversees the zoo's Africa area. "Thankfully, a local wildlife rehabilitation organization was able to find her and bring her to the zoo where she could get the care she needs."

That care included a thorough veterinary exam, performed to determine the health status of this animal that had not received any medical care while roaming the streets. Through radiographs, veterinary staff found what looks to be an air gun pellet lodged in the porcupine's jaw. Because the injury appears to have happened some time ago, they decided to leave the pellet in place.

"Luckily the pellet did not hit her eye or break any bones," said Van Beek. "But she had a hard life fending for herself outside. It's scary to think what could have happened to her."

Cape porcupines are native to sub-Saharan Africa, and while no one knows exactly how this one ended up roaming the Pacific Northwest, it's likely she was purchased through the exotic pet trade.

"Porcupines do not make good pets," Van Beek said. "As highly skilled diggers, they can't be safely kept in a backyard. They're likely to escape — and they're nocturnal, which makes them difficult to find if they do dig out. That's probably how this porcupine ended up outside for such a long time."

Residents of Spanaway, a town in Washington state near Tacoma, reported seeing the porcupine wandering at night as early as March 2017. After months of near misses, she was finally located by dedicated care staff from A Soft Place to Land, a wildlife rehabilitation facility in the area. They contacted the Oregon Zoo for help caring for the lost porcupine and finding her a permanent home.

"The porcupines that live here belong to a different species, the similar-looking African crested porcupine," Van Beek said. "But we've found an excellent home for her at the Fort Worth Zoo."

Cape porcupines are the largest rodent species in their region, with females reaching up to 3 feet long and weighing as much as 65 pounds. Among their distinguishing features are black-and-white quills on the neck and back that can grow more than a foot long.