From a tough-as-nails California condor to a pint-sized turtle hatchling, 2018 was a big year for conservation at the Oregon Zoo. Here's a look back at 10 of the year's most memorable stories.

1. Home-grown condor is living large in California
For the third consecutive year, a wild-hatched California condor has successfully fledged from a nest at Pinnacles National Park. This year's fledgling — known as Condor No. 912 — is directly descended from No. 340, aka Kun-Wak-Shun, the first condor to come out of the Oregon Zoo's recovery program. The zoo has raised more than 50 wild-bound California condors since joining the federal recovery effort to save this critically endangered species. Read more

2. Gorge pikas prove resilient following Eagle Creek Fire
Each summer, Cascades Pika Watch — a collaboration of organizations and individual pika researchers convened by the Oregon Zoo — hits the trails to monitor pikas in the Cascade mountain range. This year, thanks to a Citizen Science grant from the U.S. Forest Service, the group had a special mission: to see how pikas in the region were faring after 2017's Eagle Creek Fire. The news was encouraging. Researchers found the pint-sized mammals at 40 percent of the sites surveyed. Read more 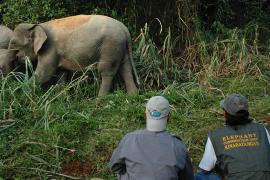 3. Zoo teams up with wildlife rangers to help elephants in Borneo
Bob Lee, who oversees the Oregon Zoo elephant program, traveled to Borneo this year to assist the Sabah Wildlife Department's rescue unit. As forest habitat continues to shrink, the number of orphaned elephants cared for by Sabah Wildlife Department's rescue unit has grown. Wildlife rangers are doing all they can, but resources are scarce and the work is challenging. Lee worked with the rangers to teach young elephants some simple behaviors that will help with their care as they grow. The zoo also funds the salaries for two rangers with the unit and is supporting the work of Dr. Farina Othman, Sabah's top elephant scientist, who is focused on reducing human-elephant conflict. Read more

4. Zoo, partners return 15 endangered turtles to the wild
Summer came early in May for 15 western pond turtles reared at the Oregon Zoo. With the help of volunteers and local wildlife agencies, the zoo returned the endangered reptiles to the wild at the Columbia River Gorge, just in time for World Turtle Day. For a year prior to release, the turtles basked in the warmth and light of a simulated summer at the zoo's conservation lab, growing large enough to have a fighting chance in the wild. Read more

5. Zoo polar bear helps answer conservation question
Everyone knows polar bears are great swimmers, right? Maybe not, according to a new study, which suggests these powerful Arctic predators might be less efficient in water than previously thought. The study — based on data collected at the Oregon Zoo and published in the November 2018 issue of Marine Mammal Science — measures the "energetic costs of aquatic locomotion in a subadult polar bear," and the findings could have serious implications for wild bears as climate change transforms their habitat. Read more 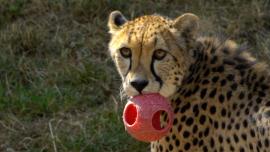 6. New 'cheetahpult' helps zoo's speediest residents stay fit
A custom-made contraption has catapulted the Oregon Zoo's cheetahs toward a new level of fitness. Dubbed the "cheetahpult," it's an 8-foot wooden device that flings a ball far enough for a cheetah — the fastest land animal on earth — to chase. After more conventional ball launchers fell short, the cheetahpult was designed and built by staff members with the zoo's speediest residents in mind. Read more

7. Science confirms: Zoo's on the right track with Elephant Lands
A local conservation biologist has confirmed what millions of Oregon Zoo visitors have already seen: Elephant Lands, the visionary new home for this community's beloved pachyderm family, has stepped up the game when it comes to elephant care. "The elephants are taking more steps, in more places, than ever before," said Sharon Glaeser, an elephant researcher at Portland State University. GPS mapping from the new habitat showed the elephants are moving throughout the entire habitat and all around its 1.3-mile perimeter. Read more

8. Rescued screech owl Pinecone finds home at the Oregon Zoo
Screech owls use camouflage to hide among the trees where they live, and are notoriously difficult to spot in the wild. Thankfully, a screech owl named Pinecone was found when he needed it most: on a cold, rainy night in Eugene. He'd fallen from his nest and was lying helpless on the ground, still too young to fly or even see. Since he was orphaned at such a young age, he couldn't be released back into the wild. His caretakers found him a new home at the Oregon Zoo, where he's an ambassador for his species. Watch the video 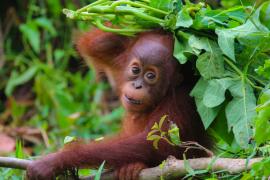 9. Zoo, partners release 500 endangered butterflies into wild
This summer, zoo butterfly conservationists joined colleagues from the Oregon Parks and Recreation Department, the U.S. Fish and Wildlife Service, and Seattle's Woodland Park Zoo to release 500 Oregon silverspot butterflies on the slopes of Saddle Mountain in an effort to stabilize declining populations of this threatened species. Saddle Mountain was chosen as the reintroduction site because a rare flower — the early blue violet — blooms in abundance there. Early blue violets are the main food source for the caterpillars as they mature into adult butterflies. Read more

10. Oregon Zoo keepers care for orangutans in Borneo
The Borneo Orangutan Survival Foundation rescues displaced, injured and orphaned orangutans. Most are rehabilitated and released back to the wild but some of them, usually for medical reasons, can't be released. Those animals still need care. In May, primate keepers from the Oregon Zoo traveled to Borneo to work with caretakers there on training techniques. By teaching the orangutans to participate in their own medical care, staff can make life much easier and more enjoyable for the animals they care for. Watch the video