Pupdate: It's 6 girls and 6 boys for painted dog Ella! 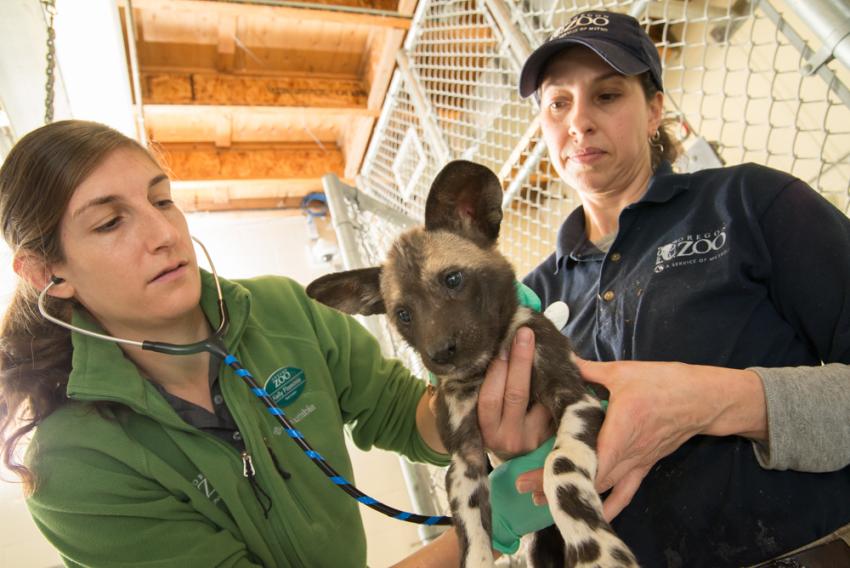 Veterinarians and animal-care staff conducted their first examination of Ella's 8-week-old pups at the Oregon Zoo today, and answered a few questions that have been on a lot of people's minds: there are 12 pups — six boys and six girls — and all are healthy and growing fast.

"It takes a lot of planning to examine this many pups at once," said Beth Foster, lead keeper for the zoo's Predators of the Serengeti area. "Luckily, we had plenty of people on hand to make sure the process went smoothly."

The neonatal checkup itself was a study in logistics: 18 humans and 12 painted dog pups gathered around the behind-the-scenes maternity den to make sure each pup was weighed, measured, examined and posed for a series of identity photos. After each pup was examined, a keeper rubbed it with some bedding to return it to a natural puppy smell, and it was placed in a den with the rest of the litter. Time was of the essence, since care staff wanted to perform a thorough check yet return the pups to their mom and dad quickly.

Foster said animal-care staffers first separated the adult dogs from the pups by offering them some favorite foods.

"We gave them plenty of food to enjoy while we conducted the exam," Foster said. "Ella and Juma [the pups' father] did great and didn't seem upset at all that we were in there with her babies. It really shows the great relationship and trust they have with their care team."

With the parents thus occupied, the zoo's animal-care staff entered the private maternity den and conducted a complete physical exam on all the pups, confirming that all six males and six females are doing well, with weights ranging from about 8 to 10 pounds.

"We've been giving Ella and her pups lots of space, so this is the first time we've known for sure how many pups there are," Foster said. "She's done so well as a first-time mom. It's great to know that all the pups are thriving."

According to Foster, that family time has been critical. The Species Survival Plan for painted dogs — administered by the Association of Zoos and Aquariums — recommends this approach for all pups born into the population. In most cases, intervention is considered inappropriate for an animal's long-term quality of life and is therefore not an option.

The pups were born in early November and have been eating, sleeping and growing in a private maternity den ever since. This litter is the first offspring for Ella and Juma, and the first of this endangered species to be born at the Oregon Zoo.

Keepers say the pups are venturing out from time to time now, weather (and parents) permitting — and they'll be hard to miss by spring, once they're a little bigger and temperatures have started to rise.

African painted dogs are listed as Endangered by the IUCN, the International Union for Conservation of Nature. Ella, Brie and Juma came to the Oregon Zoo in 2017 based on a breeding recommendation by the Association of Zoos and Aquariums' Species Survival Plan for African painted dogs. Juma, the pups' father, came from the Oklahoma City Zoo, and Ella and her sister Brie came from the Cincinnati Zoo.