Naptime is over for endangered NW butterflies 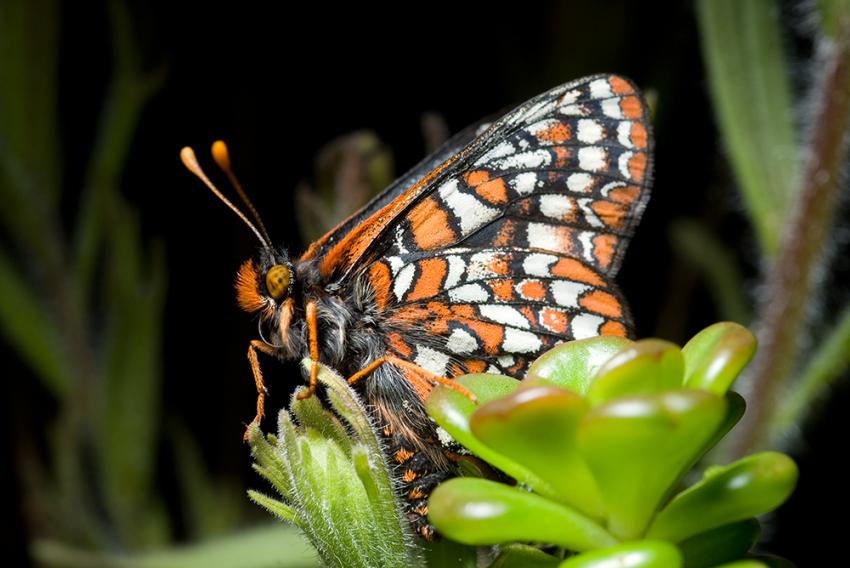 For more than a thousand endangered butterflies raised at the Oregon Zoo during the past year, it's time to wake up.

Zoo conservationists roused 1,200 Taylor's checkerspot larvae from their winter dormancy this week, transferring the very hungry caterpillars into rearing cups at the zoo's Imperiled Butterfly Conservation Lab, where they will munch on narrowleaf plantain following an eight-month snooze.

Over the next few weeks, zoo staffers will join conservationists from the Washington Department of Fish and Wildlife, the Sustainability in Prisons Project and other partners to release a majority of the growing caterpillars on prairies in western Washington, helping to reestablish populations of checkerspots where some of the region's best habitat remains.

"This is a great year so far for wild checkerspot populations," said Travis Koons, who oversees the zoo's butterfly program. "Officials from WDFW are reporting excellent numbers from out in the field, which is especially important when you're talking about a species on the brink of extinction."

While the majority of larvae are released into the wild, a smaller number will stay behind and complete their transformation into adult butterflies at the zoo — a "rear guard" of sorts that will breed and lay eggs to produce caterpillars for release next year.

The zoo-reared caterpillars will complete their development in the wild, first turning into chrysalides and then — over a span of warm, sunny days this spring — emerging as adult butterflies and unfurling their distinctive and colorful wings for the first time.

Rearing the rare butterflies comes with many challenges. One of the most difficult tasks is feeding the ever-munching larvae, which require vast quantities of specific host plants. Thanks to the zoo's horticulture department and a team of inmate gardeners at Larch Corrections Center, the checkerspot caterpillars are well fed on narrowleaf plantain, one of the plants the species eats in the wild.

This level of care is crucial: The species is listed as endangered under the U.S. Endangered Species Act and, according to Xerces Society for Invertebrate Conservation, is in imminent danger of extinction. Though once abundant in prairies west of the Cascade crest, the Taylor's checkerspot has lost 99 percent of its grassland habitat to degradation from invasive species, agriculture and urban development.

Since joining the recovery effort in 2004, the Oregon Zoo has provided more than 30,000 checkerspots for release. After a decade and a half of working to increase the endangered butterfly's numbers, Linders says the effects are becoming noticeable.

"We've started seeing Taylor's checkerspots at locations where they haven't been documented in years," Linders said. "It gives us hope for a species that is very close to disappearing completely."

To learn more about the Oregon Zoo's effort to save Taylor's checkerspots and other imperiled Northwest species, visit oregonzoo.org/conserve/species-recovery-and-conservation

As part of the Metro family, the Oregon Zoo helps make greater Portland a great place to call home. Committed to conservation, the zoo is currently working to save endangered California condors, Oregon silverspot and Taylor's checkerspot butterflies, western pond turtles and northern leopard frogs. Other projects focused on saving animals from extinction include studies on polar bears, orangutans and cheetahs.

The zoo opens at 9:30 a.m. daily and is located five minutes from downtown Portland, just off Highway 26. The zoo is also accessible by MAX light rail line. Visitors who travel to the zoo via MAX receive $1.50 off regular zoo admission. Call TriMet Customer Service, 503-238-RIDE (7433), or visit trimet.org for fare and route information.