California condor chick gets help coming out of its shell 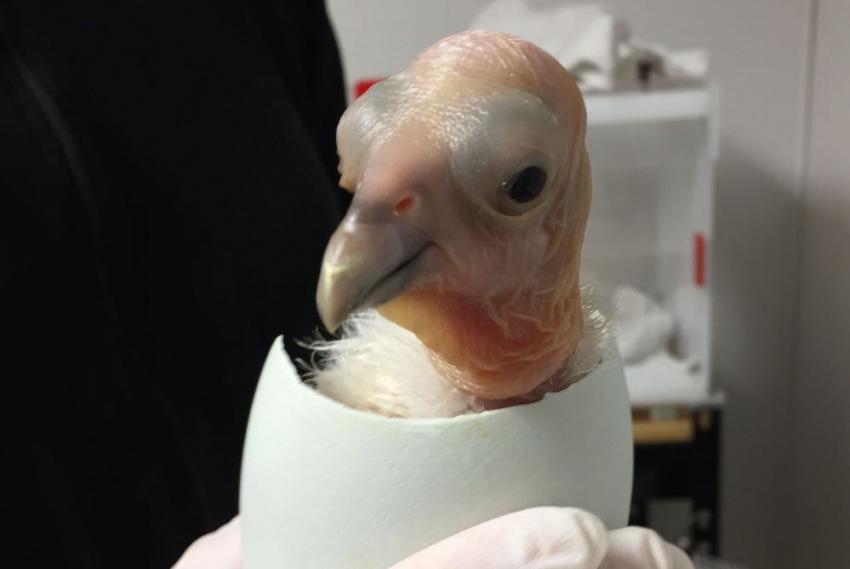 The Oregon Zoo's California Condor family continues to grow – with a little help. Since last month, five chicks have hatched at the zoo's Jonsson Center for Wildlife Conservation and two more chicks are on their way. Condor chicks usually emerge from their eggs on their own, but last week one of them, known as OZ07, needed an assist.

"The chick was active inside the egg, but it couldn't break through the shell," said senior condor keeper Kelli Walker. "It was stuck."

Usually, a condor chick begins its coming-out process after around 50 days, when the air cell — a pocket of oxygen in the egg that holds a chick's first breath — expands far enough to reach the beak. The chick still needs more air, so it lets some in by chiseling a small hole, or "pip," in the shell. It starts to move and rotate to get more air — cracking the shell and getting prepped to pop out — and hatches about 54 to 57 days after it was laid.

On day 53, Walker candled OZ07's egg – using a bright light to check under the shell – to see the chick inside the egg was active, but the pip wasn't where it should be. A few days later, Walker and a vet helped the chick along by removing part of the egg shell to encourage hatching. Condor keepers moved the egg every few hours to prompt the chick to hatch, but on day 57 it was still stuck. Walker and her team decided further intervention was necessary.

"Assisted hatches are rare but they do happen," Walker said. "If a chick isn't hatching on its own for whatever reason, we work with our vets to help the process along."

Walker and a vet stepped in to help, easing OZ07 out of its egg and into the world by carefully snipping open sections of the shell. The chick spent one night in the center's intensive care unit for observation but by the next morning, it was alert and standing on its own. Then, in what might seem like a step backward, the condor keepers placed the small bird back inside an eggshell.

"If we put the chick straight back under the parents with no egg, it's confusing for them," Walker explained. "So, we have to pretend a little. We actually save shells from infertile eggs for this purpose."

Walker returned the "re-hatched" chick to the condor nest room, and within five minutes, parents Mali and Sespe began caring for it, warming it with their feathers in a process known as brooding.

"Mali and Sespe are incredibly doting parents," Walker said. "They began brooding immediately and neither of them wants to leave their new baby."

The chick will be under the watchful wings of its parents for at least eight months before moving to the Jonsson Center's pre-release pens for about a year and a half. Eventually, it will travel to a wild release site to join free-flying condors in California, Arizona or Baja Mexico.

The California condor was one of the original animals included on the 1973 Endangered Species Act and is classified as critically endangered. In 1982, only 22 individuals remained in the wild and by 1987, the last condors were taken into captivity in an attempt to save the species from extinction. Thanks to breeding programs like the Oregon Zoo's, the world's California condor population now totals more than 460 birds, most of which are flying free.

OZ07 is the 69th chick to hatch at the Jonsson Center since 2003, and 42 Oregon Zoo-reared birds have gone out to field pens for release. In addition, several eggs laid by Oregon Zoo condors have been placed in wild nests to hatch.

The Oregon Zoo's condor recovery efforts take place at the Jonsson Center for Wildlife Conservation, located in rural Clackamas County on Metro-owned open land. The remoteness of the facility minimizes the exposure of young condors to people, increasing the chances for captive-hatched birds to survive and breed in the wild. California condor breeding programs are also operated at San Diego Zoo's Wild Animal Park, the Los Angeles Zoo and the Peregrine Fund's World Center for Birds of Prey in Idaho.