They're back: Sculpture garden returns to Oregon Zoo 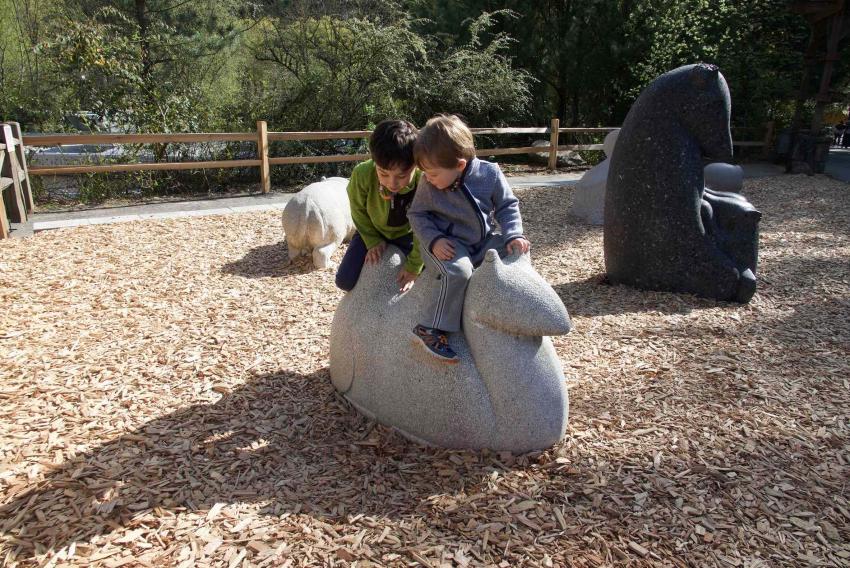 The Oregon Zoo welcomed back some old friends last week. The Warren J. Iliff Sculpture Garden, a fixture on zoo grounds for nearly 40 years, has a new home on Wildlife Way near the education center. The statues have been in storage since construction began on the Elephant Lands habitat in 2012.

The garden is home to five animal sculptures: a hippo, a bighorn sheep, a bear and her cubs, a mouse and a camel calf. The oldest of these, the hippo, has been charming families at the zoo since 1978.

Warren Iliff, director of the zoo from 1975 to 1985, created the garden as a “magical place for children to learn, wonder at and experience the world of animals.” After acquiring the cement hippo, named Kubwa Sana, he arranged for the remaining sculptures to be donated to the zoo. Though not all of the animals have official names, the limestone mouse goes by Bitsy, the winner of a naming contest held in 1980.

“We’re excited to have these sculptures on display again,” said Tyson Stoianoff, the zoo’s interim public art administrator. “It’s really fun to see guests taking photos with them, just like they might have done when they were kids.”

The sculptures have been so popular through the years, in fact, that the bear and her cubs are being treated to a restoration this week. Their marble surface will be coated with a new sealant, and next month the mother bear will get a new pair of ears — her first pair was worn down from decades of head rubs.

The sturdy sculptures are surrounded by bark chips, and kids of all ages are welcome to climb on them and pose for pictures.