Drink a beer, save a condor: New brew helps an iconic bird 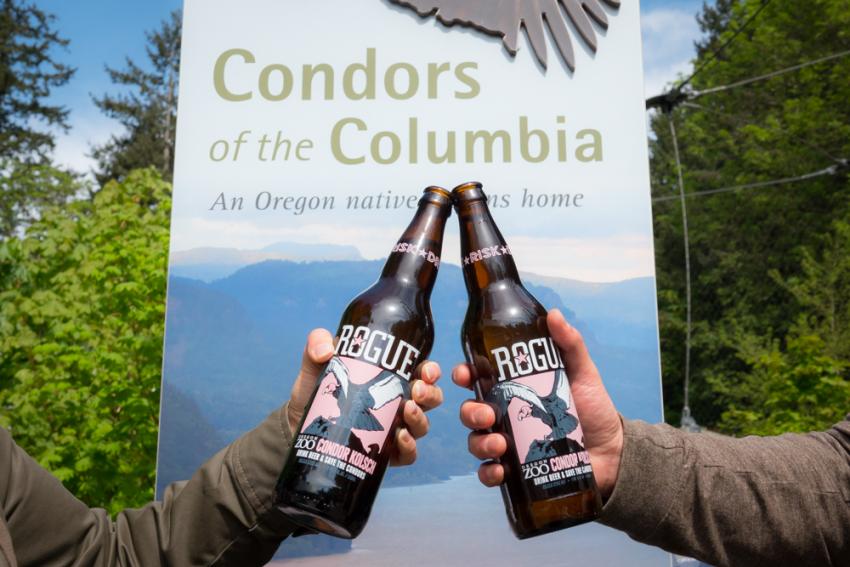 California condors, the largest land birds in North America with wingspans of nearly 10 feet, were one of the original animals included in the 1973 Endangered Species Act. By the 1980s, only 22 remained in the wild, and all were brought under human care to save the species. Thanks to breeding programs like the Oregon Zoo's, the world's California condor population now totals more than 460 birds, most of which are flying free.

"Condors are native to the Pacific Northwest and were commonly seen here during the Lewis and Clark Expedition," noted Dr. Don Moore, Oregon Zoo director. "Ultimately, we'd love to see them return to the skies over Oregon."

Accumulated lead poisoning—a problem that plagues bald eagles, golden eagles and all raptors and scavengers—is the most severe obstacle to the California condor's recovery as a species.

"We are happy to support the recovery effort of the California condor by brewing a beer for the Oregon Zoo," says Rogue President Brett Joyce. "Supporting the local community — both the people and the animals — is in Rogue's DNA. In order to lease our first building in 1988, we had to promise Mo Niemi (of the famous Mo's) that we would give back and 'feed the fishermen.' The Condor Kolsch project helps us fulfill our first promise, and we are happy to do it."

Condor Kolsch is available on draft at the Oregon Zoo and at Rogue pubs as well as in 22 ounce bottles in Oregon.

Rogue Ales & Spirits, the only farmer-brewer-distiller-cooper in the United States, was founded in Oregon in 1988 as one of America's first microbreweries. Rogue has won more than 1,900 awards for taste, quality and packaging, and is available in all 50 states as well as 54 countries. Proudly rooted in Oregon soil, Rogue's beers, spirits and sodas are made with ingredients grown on Rogue Farms in the Tygh Valley and in Independence, Oregon. Rogue Spirits are hand-distilled on a 550-gallon still in Newport, Oregon, aged in the thick ocean air of the Yaquina Bay and bottled by hand. Since 2008, Rogue has remained committed to sharing the terroir of Oregon hops, barley, rye, wheat, honey, cucumbers and pumpkins one acre at a time by growing its own.