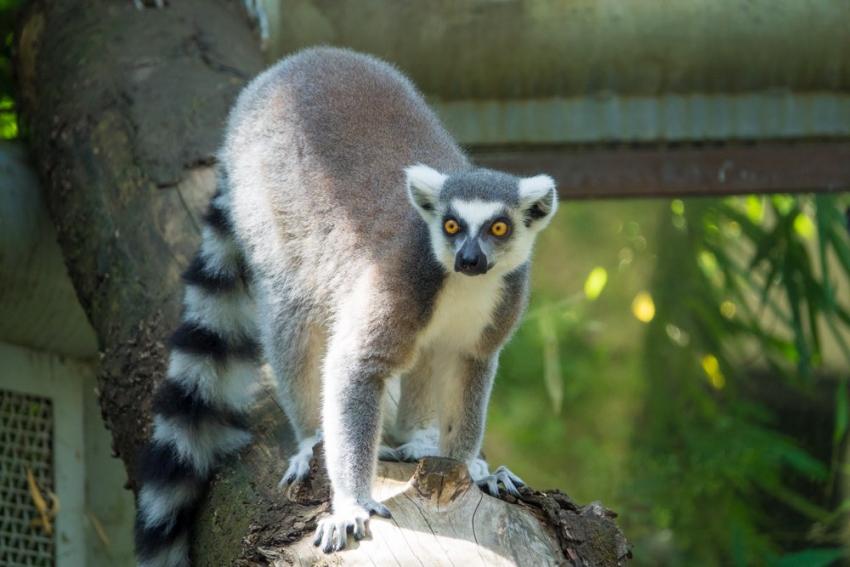 A group of lemurs is called a conspiracy, but the five lemurs who made their debut at the Oregon Zoo yesterday appear to be on the up and up. Two black-and-white ruffed lemurs and three ringed-tailed lemurs moved in to the zoo's primate area early Tuesday, next-door to the white-cheeked gibbons.

Visitors to the zoo might hear the lemurs before they see them. They greet each other with distinct, bird-like calls that can be heard up and down Zoo Street between Steller Cove and Elephant Lands. Lemurs have several styles of vocalizations, which they use to communicate with their family groups.

The lemurs arrived at the zoo earlier this month and have been getting to know each other and their keepers behind the scenes. Caregivers say they're settling in well. The five furry primates quickly began exploring their new surroundings, climbing on logs and even hanging upside down from the top of the habitat to get a better look.

A.J. and Sriracha, the two black-and-white ruffed lemurs, can be identified by the striking tufts of white fur on either side of their heads, as well as their black and white body markings. Aislinn, Gizmo and Holy, the three ring-tailed lemurs, have gray fur on their bodies and long striped tails.

And as for any conspiracy theories? Suhn isn't too worried.

"This is one conspiracy we're pretty happy about," she said.

Though their inquisitive faces and longer snouts resemble foxes, lemurs are actually prosimians, a suborder of primate known for their wet noses and keen sense of smell. There are more than 100 known species of lemur, all found in only one area on Earth: Madagascar and the nearby Comoro Islands. Due to a combination of deforestation, habitat loss and poaching, lemurs are one of the most endangered mammal groups in the world.

The new arrivals came to the Oregon Zoo on a recommendation by the Association of Zoos and Aquariums' Species Survival Plan for lemurs — a cooperative program among accredited zoos that helps create genetically diverse, self-sustaining populations to guarantee the long-term future of animals. These SSPs also support relevant field projects, research and public education to help prevent animal endangerment and extinction.