Montane, one of the zoo's adult mountain goats, gave birth Friday morning to a bouncing baby kid. This is the second mountain goat born at the Oregon Zoo in less than a month — in late May, Montane's herdmate Sassy welcomed a new kid, the first to be born at the zoo in more than 15 years.

Montane and her kid can be seen amid the rocky crags of the Cascade Crest habitat just past the zoo's main entrance. To see video of the new kid on the rock, go to bit.ly/babymountaingoat.

This is a particularly significant birth for Montane, who was an orphan rescued by Idaho wildlife officials.

"Since she didn't grow up in a herd, Montane doesn't have much experience with birth and young kids," said Amy Cutting, who oversees the zoo's Great Northwest area. "It was really fortuitous that Sassy had her baby first, and Montane got a chance to observe and learn from her."

While mothers of some species keep their newborns hidden away for several weeks, mountain goat kids are typically on their feet within minutes after birth, quickly learning to navigate their sparse and rocky alpine environment. The new kid was out exploring within an hour, with Montane close by to keep watch.

"It was up on its feet right away, though a little wobbly" said Cutting. "Mountain goat kids are extremely precocious and nurse within the first few hours. We were glad to see the pair figuring things out pretty quickly."

Caregivers won't know whether the new kid is male or female until its first veterinary check, probably in about a month. 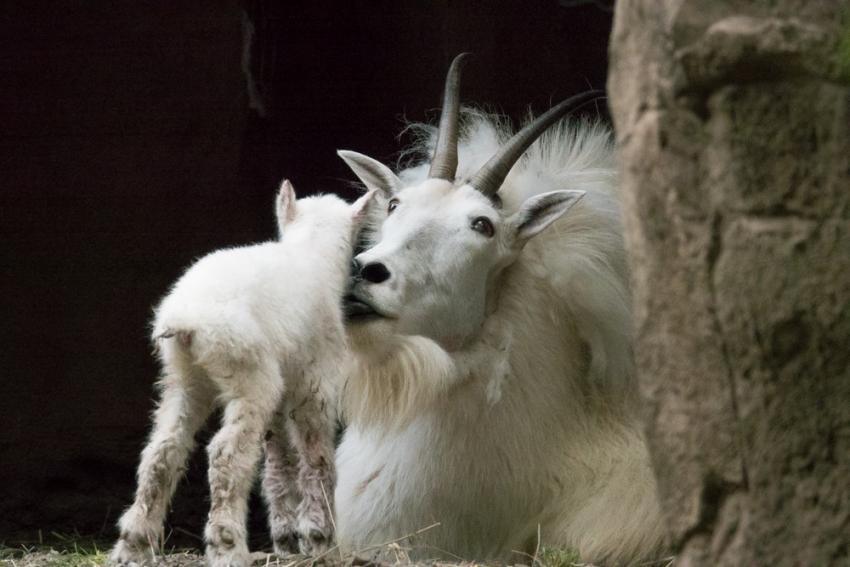 Sassy and Finnegan will take turns outside with Montane and her new kid until everyone has a chance to get to know each other. Male mountain goat Honovi, the father of both the young ones, knows better than to get too inquisitive and is keeping a respectful distance, according to Cutting.

"We're thrilled to have two healthy mountain goat babies in Cascade Crest," Cutting said. "As they get older, we anticipate lots of fun interaction between the two kids."

Mountain goats are known for their amazing climbing and balancing abilities. Last summer, Cutting got iPhone video of Sassy and Montane enjoying an energetic bout of poetry-in-motion parkour: bit.ly/MountainGoatParkour.

In the Pacific Northwest, wild mountain goats live on various peaks in the Washington Cascades and across Oregon ranges like the Elkhorns and Wallowas. They also can be seen on the Olympic Peninsula, where they are non-native — introduced there by a hunting group in the 1920s — and have become a threat to local wildlife.

In March, the National Park Service announced plans to relocate 90 percent of the Olympic mountain goat population to its native range. The Oregon Zoo has contributed $5,000 toward transport enclosures to aid in the effort.