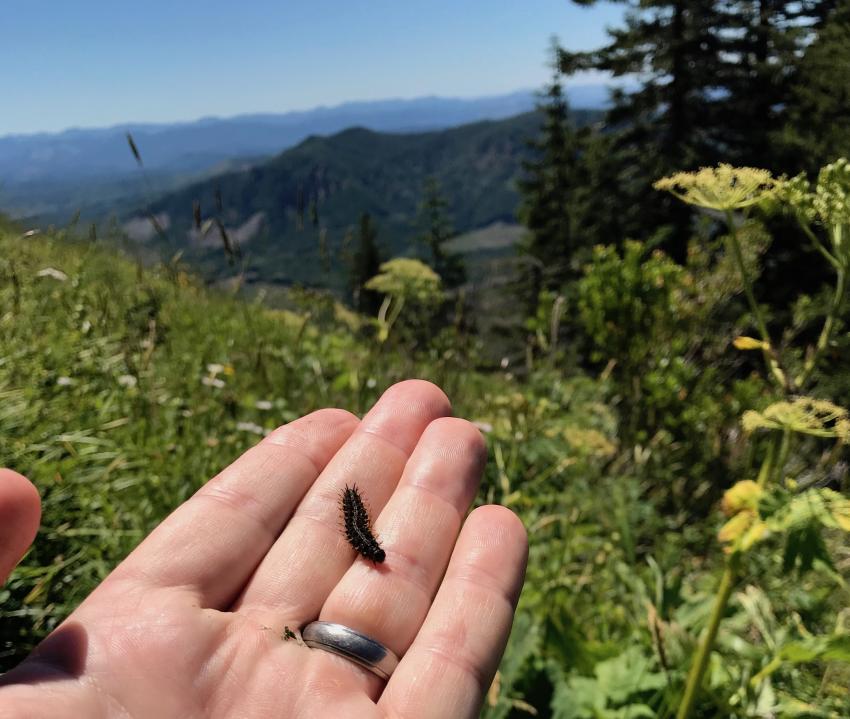 It's summertime, and some of the Oregon Zoo's tiniest residents have headed for the mountains of Oregon's coastal range.

On July 12, zoo butterfly conservationists joined colleagues from the Oregon Parks and Recreation Department, the U.S. Fish and Wildlife Service, and Seattle's Woodland Park Zoo to release 500 Oregon silverspot butterflies on the slopes of Saddle Mountain in an effort to stabilize declining populations of this threatened species.

The Oregon silverspot was federally listed as threatened in 1980, and population numbers have declined continuously over the past three decades. Today, just four isolated populations remain: three in Oregon and one in California.

Saddle Mountain was chosen as the reintroduction site because a rare flower — the early blue violet — blooms in abundance there. Early blue violets are the main food source for the caterpillars as they mature into adult butterflies. The mountain is one of the few remaining areas where early blue violets grow in large enough quantities to sustain a butterfly population. Elsewhere, the delicate violets have been choked out by invasive weeds and forest succession.

"Saddle Mountain is prime real estate for Oregon silverspots," said Trevor Taylor, manager for the reintroduction project at OPRD. "Our hope is the caterpillars will be the start of a vibrant and lasting butterfly population on the mountain."

The caterpillars began their journey to the mountain as part of the zoo's imperiled species program at the Oregon Zoo and Woodland Park Zoo. Each year, a small number of female Oregon silverspots are collected from wild populations and brought to zoo conservation labs to lay eggs. The hatched larvae are raised over the winter and released into the wild when they've matured into caterpillars.

In addition to releasing pupae, the Oregon Zoo raises and plants thousands of early blue violets to plant at silverspot habitat sites.

Funding for the reintroduction project was provided by the USFWS Cooperative Endangered Species Conservation Fund.