I am Sam, Sam I am: Samudra meets Samson at Oregon Zoo

It was a meeting of the two Sams today at the Oregon Zoo. A pair of 4-ton male Asian elephants — 10-year-old Samudra and 21-year-old Samson — had their first tusk-to-tusk encounter at the zoo's award-winning Elephant Lands habitat this morning, and keepers say the pair seem to be fast friends.

The two males first met inside Forest Hall, touching trunks, sharing some snacks and getting to know each other before heading outside with the rest of the elephant family. Though this was the pair's first physical encounter, keepers say they have been seeing, hearing and smelling each other since Samson first arrived last year from ABQ BioPark Zoo in Albuquerque, N.M.

"It's great to be getting these two Sams together," said Bob Lee, who oversees the zoo elephant program. "The timing is good because Samudra is maturing into an adult bull now, and he could benefit from the companionship of an older male."

Lee hopes Samson can serve as a "big brother" to Samudra, who turns 11 this summer and has begun to demonstrate adult behavior. Though Samson is 10 years older than Samudra, the two Sams are close in size. Samson weighs about 9,800 pounds and is a bit taller than Samudra, who now is around 8,230 pounds—and growing—with a slightly stockier build.

Both elephants are true "tuskers," a genetic trait that is increasingly rare among Asian elephants. Unlike African elephants, only male Asian elephants have tusks — and not all males do. As more elephants are killed for their ivory, fewer of those with the tusk gene have survived. The smaller incisors seen on females and some males are known as "tushes" and do not grow into full tusks.

Born Aug. 23, 2008, Samudra was the first third-generation elephant born in the United States. He is known for his love of water — his name means "ocean" in Sanskrit — and can often be found swimming in the 160,000-gallon pool at Elephant Lands. 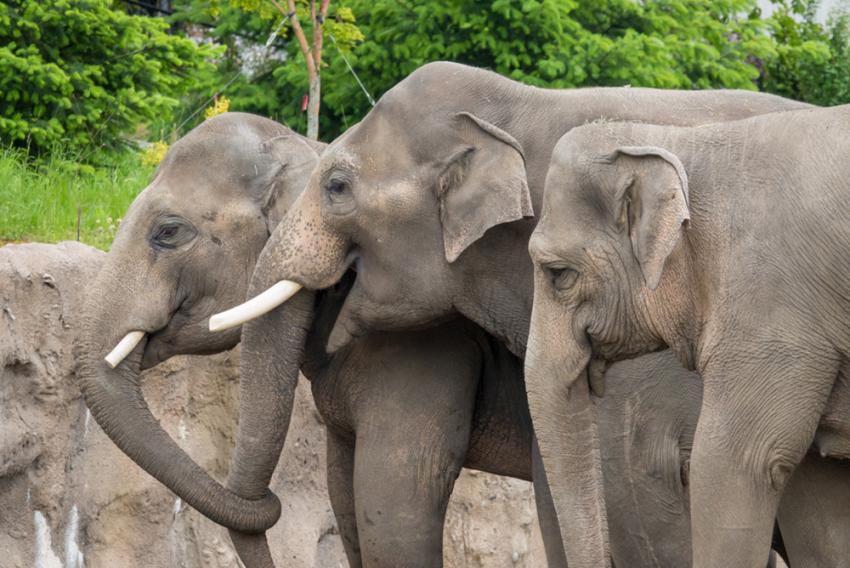 "Over the years, we've learned the importance of family and connection as a critical part of an elephant's full social life," Lee said. "Belonging to a multigenerational family and participating in the raising of young — that's so much of what it means to be an Asian elephant. It stimulates and motivates each member of the family physically, emotionally and psychologically."

The zoo's award-winning Elephant Lands habitat, which opened in 2015, was designed to maximize activity and choice, with a variety of feeding methods that mimic the grazing habits of wild elephants. The habitat's size and flexibility lets male elephants drift in and out of the herd, minimizing keeper-made decisions about which individuals socialize together at any given time.

Typically, Lee said, adult male elephants are not permanent members of family groups. The majority of their time spent with females is for courtship and breeding.

The Oregon Zoo is recognized worldwide for its Asian elephant program, which has spanned more than 60 years. Considered highly endangered in their range countries, Asian elephants are threatened by habitat loss, conflict with humans and disease. It is estimated that just 40,000 to 50,000 elephants remain in fragmented populations from India to Borneo. The zoo supports a broad range of efforts to help wild elephants and has established a $1 million endowment fund supporting Asian elephant conservation.