Asian elephant Chendra is pregnant, baby due in 2020

Chendra, a 26-year-old Asian elephant at the Oregon Zoo, is pregnant and expected to deliver another member of Portland's elephant family in late 2020.

The pregnancy — while long hoped for and strongly encouraged by the Association of Zoos and Aquariums' Species Survival Plan for Asian elephants — was a happy surprise for zoo staff. Over the past decade, Chendra has spent time with several male elephants but until recently was not observed engaging in breeding behavior, according to Bob Lee, who oversees the zoo's elephant area. At around 26, she was nearing the outer age limit for first-time elephant moms; elephants that don't conceive by their mid-20s rarely conceive at all.

"We are so excited for Chendra," Lee said. "Raising a calf is one of the most enriching things an elephant can experience, and we didn't know whether she would ever have that chance. Asian elephants have evolved to live in in small social groups, and every member of the group has some role in raising young. We're thrilled by the prospect that Chendra and the rest of the herd may get that opportunity in the near future."

Care staff say Chendra conceived sometime in January, although they are not certain which of the zoo's two male elephants — Samson or Samudra — is the father.

"All we can say for sure is that the dad's name is Sam," Lee said. "Chendra has spent a lot of time with each of them over the past year. We won't know which Sam until the baby's born and we're able to do some genetic tests."

"A serological antigen-detection test flagged Chendra as reactive last week," zoo veterinarian Kelly Flaminio said. "This test is not a reliable indicator of active TB, but it can be an early predictor, so we're preparing for that outcome in order to be on the safe side. If we need to treat her, it's better to get as quick a jump on it as we can."

Dr. Flaminio says a definitive TB diagnosis takes up to eight weeks. In the meantime, Chendra is being housed separately, and animal-care staff are acting with an abundance of caution to ensure she and the rest of the elephant family remain healthy and safe. 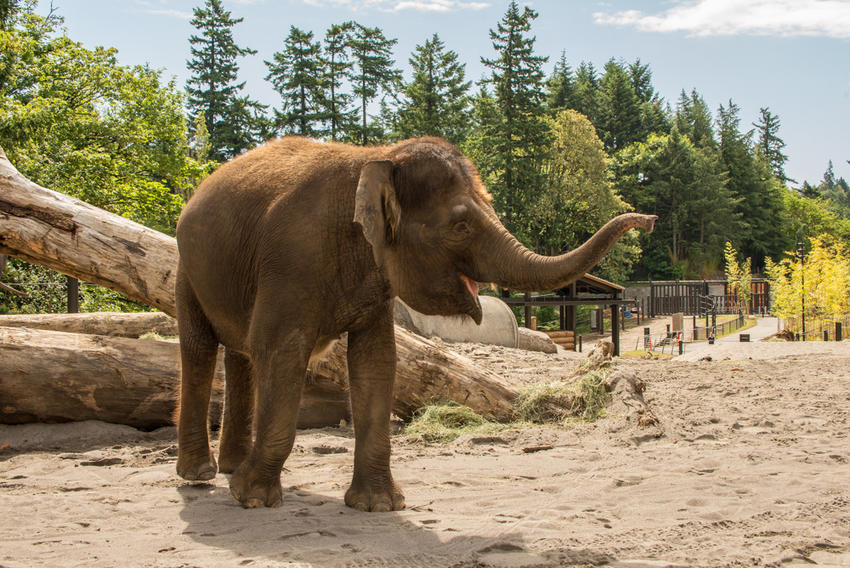 The Oregon Zoo has successfully treated three other elephants for TB — most recently Shine, who was pronounced clear of infection in 2017. Shine's treatment represented a breakthrough, Dr. Flaminio notes: Staff developed an innovative drug-delivery system for her that has been shared with elephant-care facilities around the country and could help other animals in need of medical treatment. Chendra readily accepts placebos using this system so there would be no delay in starting treatment if necessary.

Treatments for expectant human moms with TB do not appear to adversely affect their pregnancy; less is known about the effect of treatment on pregnant elephants, although the medications are the same. If treatment is necessary for Chendra and all goes well, Dr. Flaminio says, the pregnant pachyderm would be free of infection and back with the herd long before the baby is due. The gestation period for elephants is around 22 months, the longest of any land mammal, and Chendra is now six months pregnant — not yet past her first trimester in human terms.

Lee says Chendra's pregnancy is especially touching given her rough start to life. As a young calf, she was found wandering — orphaned, alone and hungry — near a palm oil plantation in Borneo. She had wounds on her front legs and her left eye, leaving her blind in that eye. Because she was so young and could not be reunited with her herd or released back into the wild, the Sabah government reached out to the zoo, which was able to give her a home here in 1999.

"Having a family and raising a calf of her own is something we've always hoped for with Chendra," said Dr. Sen Nathan, assistant director of the Sabah Wildlife Department in Malaysian Borneo and head of the state's Wildlife Rescue Unit. "A chance for her to have a complete life like that, after all she had been through — we couldn't ask for anything more."