Hundreds of imperiled northern leopard frogs will be hopping back into the wild soon, thanks to a pilot recovery program at the Oregon Zoo. The froglets, which the Washington Department of Fish and Wildlife collected as eggs earlier this spring, are growing big and strong in the zoo's conservation lab.

"The Oregon Zoo has a great track record for head-starting native species, and we're thrilled to be able to help northern leopard frogs too," said Shelly Pettit, the zoo's senior keeper for reptiles and amphibians. "The froglets are doing really well so far. We're doing everything we can to get them ready to go back to the wild."

Once abundant throughout North America, northern leopard frogs are rapidly disappearing from their native ranges in Washington, Oregon and western Canada. In Washington, where the zoo-reared froglets will be released, the species has been listed as endangered since 1999 and only one known population remains. 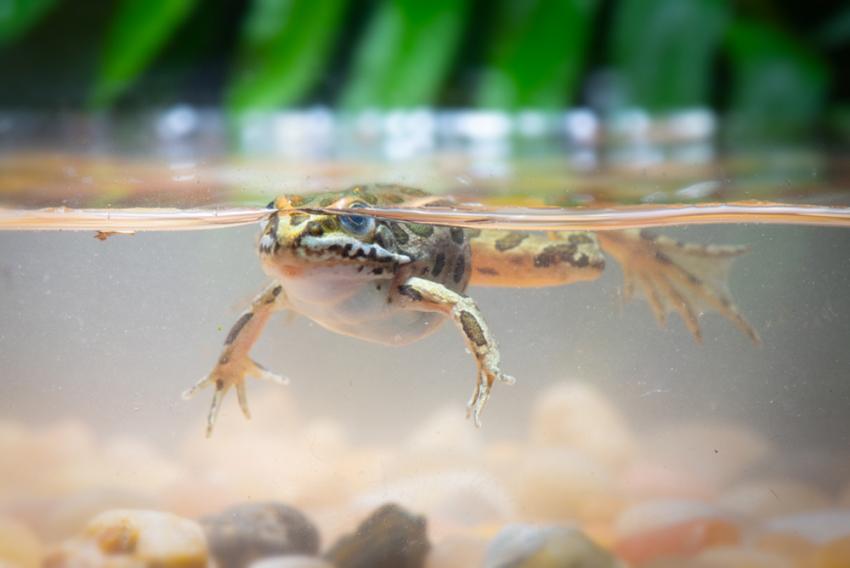 "The froglets came to us as eggs, and we're keeping them safe, warm and fed until they grow legs and can hop on their own," Pettit said. "A big, healthy young frog has a much better chance of surviving in the wild than an egg or a tadpole."

Though the reason for the northern leopard frog's decline in the Pacific Northwest is still unknown, it is likely due to a combination of threats from habitat loss, disease, non-native species, pollution and climate change. By head-starting the frogs at the zoo, Pettit and her team are hoping to combat these threats and grow the population of northern leopard frogs in the region.

"We're at a critical point for this species," Pettit said. "We're doing everything we can help northern leopard frogs thrive again in the Pacific Northwest."

The Oregon Zoo's head-starting program is a critical step between egg gathering by WDFW and eventual release at the Columbia National Wildlife Refuge in Washington. Recovery efforts by the zoo, WDFW, U.S. Fish and Wildlife Service and Washington State University aim to bring the amphibians back to the landscape.

According to wildlife officials, northern leopard frogs are an important foundation species in natural ecosystems, an indicator of water quality, predator and prey, and a source of inspiration for young and new naturalists across the world.