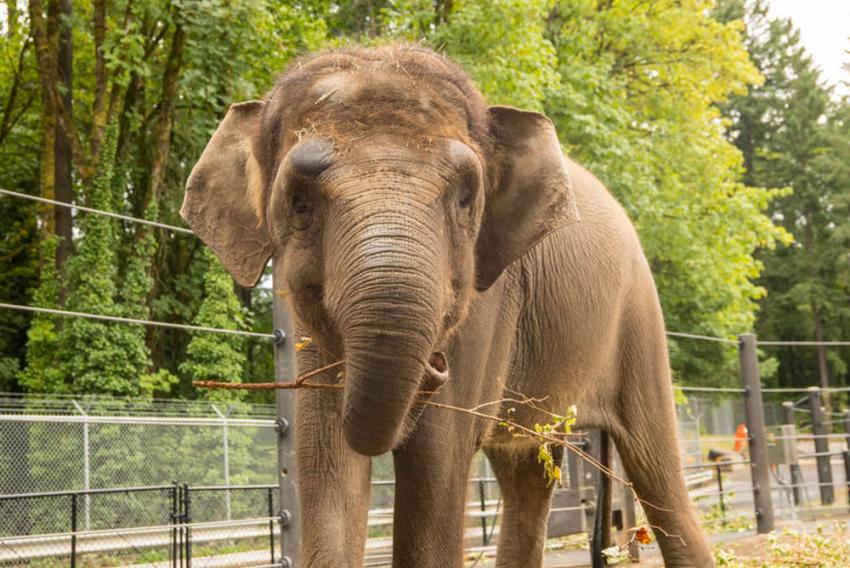 Oregon Zoo animal staff are providing around-the-clock care and some extra TLC this week for Chendra, a 26-year-old Asian elephant whose long-hoped-for pregnancy has ended in miscarriage, veterinarians say.

"We knew this was a possibility, but that doesn't make it any easier," said Bob Lee, who oversees the zoo elephant program. "We were all so excited for Chendra. Raising a calf is one of the most enriching things in an elephant's life, and we really hoped this was her chance to experience that."

"Miscarriages, sadly, are common in most mammal species, including elephants and even humans," said zoo veterinarian Kelly Flaminio. "We tend not to talk about it a lot because it can be a painful subject, but most of us know someone who's been through this type of loss."

Miscarriages usually occur early in the pregnancy, Dr. Flaminio added, and that was the case for Chendra, who was close to eight months pregnant — just around the end of the first trimester in human terms. The gestation period for elephants is around 22 months, the longest of any land mammal.

Chendra's pregnancy — while long hoped for and strongly encouraged by the Association of Zoos and Aquariums' Species Survival Plan for Asian elephants — was a happy surprise for zoo staff when it was confirmed in July. Unfortunately, Lee said, because of her age it is doubtful that Chendra will become pregnant again.
For now, he says, staff are simply focused on her health, comfort and well-being, giving her extra TLC and attention as they begin to treat her for TB.

"There's no connection between Chendra's TB and her miscarriage, but the loss of her pregnancy does simplify her treatment plan," Dr. Flaminio said. "Our focus is now on making sure Chendra stays healthy and getting her back with the rest of her family as quickly as possible."

If all goes well, she says, that could happen by late fall.

The Oregon Zoo has successfully treated three other elephants for TB — most recently Sung-Surin, who was pronounced clear of infection in 2017. Her treatment represented a breakthrough: Staff developed an innovative drug-delivery system that has been shared with elephant-care facilities around the country and could help other animals in need of medical treatment.

Lee says Chendra's pregnancy was especially touching, and her miscarriage is all the more sad, given her rough start to life. As a young calf, she was found wandering — orphaned, alone and hungry — near a palm oil plantation in Borneo. She had wounds on her front legs and her left eye, leaving her blind in that eye. Because she was so young and could not be reunited with her herd or released back into the wild, the Sabah government reached out to the zoo, which was able to give her a home here in 1999.