The towering 2-year-old, who arrived in Portland late last month, met the zoo's other giraffes, Buttercup and Desi, on Tuesday, and animal-care staff report Kiden is making herself right at home.

"Giraffes are herd animals, so it's wonderful to welcome a new member of the family," said Becca Van Beek, who oversees the zoo's Africa area. "Yesterday was her first day out with the boys, and she and Buttercup have been spending a lot of time together."

The new giraffe spent a few weeks acclimating before meeting Buttercup and Desi, along with the Spekes gazelle and southern ground hornbills that share their mixed-species habitat.

"Young giraffes like Kiden are naturally curious and playful, and it's been a lot of fun to see her interacting with the other animals," Van Beek said.

Giraffe fans will have to wait a bit to see Kiden in person, as the zoo remains closed to help slow the spread of COVID-19. The Oregon Zoo Foundation is leading efforts to fund critical operating needs of the zoo during its closure. To contribute, go to oregonzoo.org/donate.

Masai giraffes like Kiden and Buttercup — the largest giraffe subspecies and the tallest mammals on earth — can grow to around 18 feet tall. Other impressive stats include: tongues up to 21 inches long, running speeds of up to 35 mph, and the ability to eat up to 75 pounds of leaves and brush a day.

Kiden was born at the Greenville Zoo on Jan. 31, 2018, and came to Oregon as part of the Association for Zoos and Aquariums' Species Survival Plan for giraffes — a cooperative program among zoos that helps create genetically diverse, self-sustaining populations to guarantee the long-term future of these animals. The Masai subspecies of giraffe is endangered, with fewer than 33,000 believed to remain in eastern Africa, and populations there have declined by more than 50% in recent years, in part due to poaching. 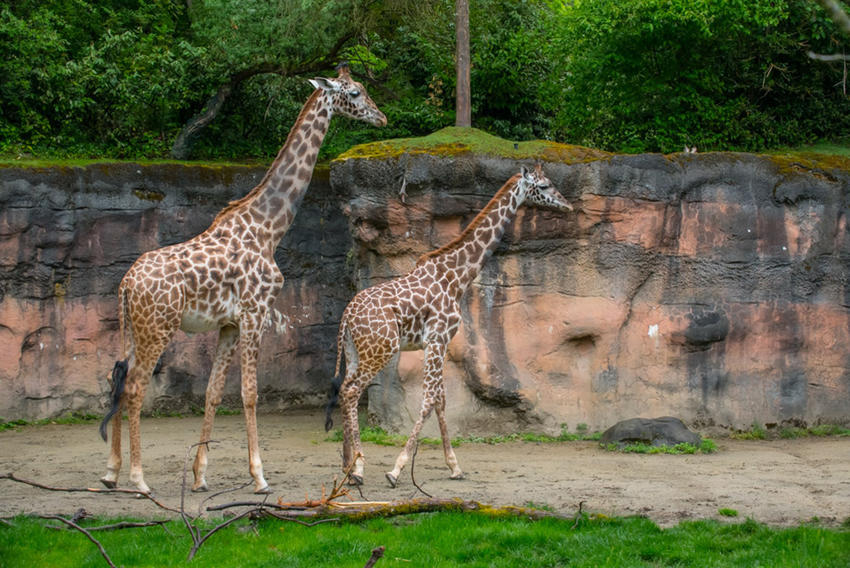 "Every Masai giraffe we care for is critical to keeping this subspecies alive," said Oregon Zoo deputy director Sheri Horizsny, who serves as the AZA's SSP coordinator for giraffes. "Our hope is that one day Kiden and Buttercup will start a family of their own."

Horiszny said the zoo was planning to cancel Kiden's transfer, which had been in the works for some time, because of the COVID-19 closure and resultant economic pressures, but a donor to the Oregon Zoo Foundation stepped forward and completely funded the move.

"It was incredibly generous, and we are so excited about this," Horiszny said. "The window for transfers is small and this move is significant for the species' survival. Kiden is especially important, genetically speaking, because she has few relatives in the zoo population."

Horiszny, a longtime giraffe benefactor, has founded three conservation initiatives to help the animals in the wild. Giraffes are also among the animals supported through Share the Care, the Oregon Zoo Foundation's symbolic adoption program, which helps fund the zoo's efforts to save species facing extinction.