Zoo and Partners Return Endangered Turtles to the Wild

Summer's just heating up in Portland, but for 23 western pond turtles reared at the Oregon Zoo, a nine-month stretch of warm days and nights is drawing to an end.

Since last October, the turtles basked in the warmth and light of a simulated summer in the zoo's conservation lab, growing large enough to have a fighting chance in the wild. Today, with the help of conservation partners and local wildlife agencies, the zoo returned these endangered reptiles to the wild at the Columbia River Gorge.

As part of the Western Pond Turtle Recovery Project, conservation scientists "head-start" newly hatched turtles gathered from wild sites, nurturing them at the zoo for up to a year. In addition to the 20 wild hatchlings brought to the lab last fall, this year's release includes three turtles that hatched at the zoo.

"Here in the conservation lab, the turtles don't go dormant over the winter," said senior keeper Shelly Pettit. "They experience summer year-round, and in less than a year grow to about the size of a 2- to 3-year-old wild turtle. This gives them a much greater chance of surviving to adulthood." 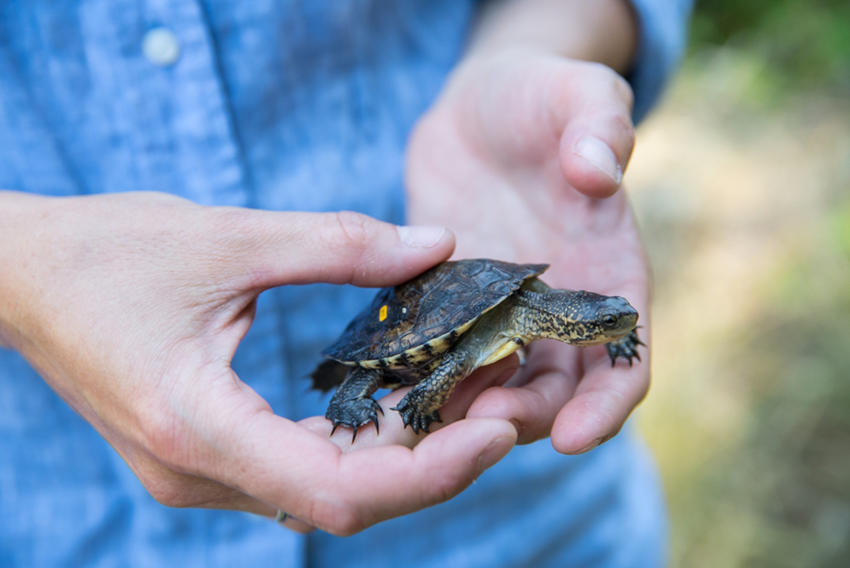 Keepers prepare the turtles for life outdoors by giving them plenty of time outside to acclimate to changing temperatures. Once the turtles reach about 50 grams (a little less than 2 ounces), they're taken to ponds along the Columbia River Gorge, where a team of conservationists returns them to their natural habitat and monitors them for safety. In one study, scientists estimated that 95% of the turtles released back to sites in the Gorge survive annually.

"When the young turtles are this big, they're able to avoid predators that threaten them, like non-native bullfrogs," Pettit said.

The biggest threat to fragile baby turtles has been the bullfrog. Native to areas east of the Rockies, this invasive frog has thrived throughout the West, driving pond turtles and a host of other small, vulnerable aquatic species to the brink of extinction.

"This collaboration has been essential in helping western pond turtles escape the mouths of invasive bullfrogs," said Hannah Anderson, Washington Department of Fish and Wildlife's diversity division manager. "With low reproductive rates, and real challenges from habitat loss and disease, it is good to know partners are working alongside us to bring this once prevalent species back to the Columbia River Gorge."

"It's a team effort, and we're thrilled to give these young western pond turtles a brand-new home at our Turtle Haven preserve," said Sara Woods, land trust stewardship coordinator at Friends of the Columbia Gorge. "It's so rewarding to see them swim off and start exploring."

Western pond turtles are a priority species for the Association of Zoos and Aquariums' SAFE program, which brings together the expertise and resources of AZA members and partners to help save species from extinction.