Zoo's spring forecast: sunny with a chance of Nora

Young polar bear will be out this week, but viewing opportunities will be up to her

She made a big splash when she arrived here in 2016, and we missed her big-time when she went away. Now, as the Oregon Zoo puts the finishing touches on its new Polar Passage habitat, Nora the polar bear is back!

Beginning Thursday, April 1, the zoo will open public walkways around the new polar bear habitat, which officially opens later this spring. In the meantime, guests may get some up-close looks at Nora as she explores, splashes around or naps in her new home. Fans should keep in mind that viewing opportunities will be up to Nora herself, who may prefer to be in her behind-the-scenes den areas at times.

"Visitors might see quite a bit of her in the coming weeks, but it's all up to Nora," said Amy Cutting, who oversees the zoo polar bear area. "We know everyone is excited to see her, and we really appreciate their patience and understanding." 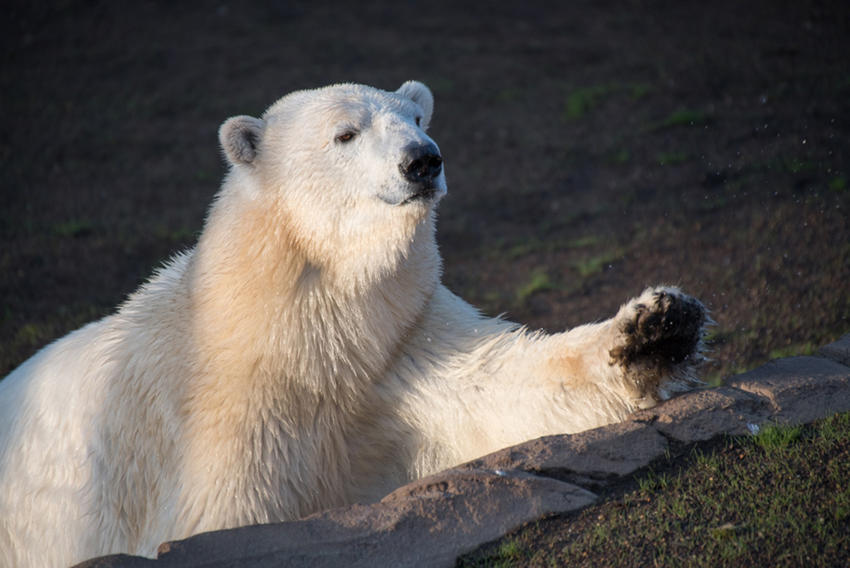 Although there is no set schedule for when Nora might be out, she is typically most active before 11 a.m., according to keepers. Cutting cautions that visitor viewing could close again if Nora needs additional quiet time. Updates will be posted as quickly as possible to the zoo's website.

Hope moved from Hogle to Chicago's Brookfield Zoo last month on a recommendation from the Association of Zoos and Aquariums' Species Survival Plan for polar bears — a cooperative program that helps maintain a genetically diverse, self-sustaining population to guarantee the long-term future of these animals. Another female polar bear will join Nora at Polar Passage this fall.

In the meantime, Nora and her Oregon Zoo keeper staff can get reacquainted and familiar with the new habitat, which was conceived partly with her in mind.

Polar Passage is one of eight major projects made possible by the community-supported zoo bond measure passed in 2008. The final three projects — improved habitats for primates, rhinos and polar bears — are all set to open this year.

Many of the features at Polar Passage were funded through the Oregon Zoo Foundation's $8.5 million Heart of the Oregon Zoo campaign, which supports zoo's animal welfare, conservation and education efforts. To learn more or to make a gift, call 503-220-2493 or email foundation@oregonzoo.org.