Kelp And Sea Otters Go Together

Oregon’s last population of sea otters disappeared more than a century ago, wiped out by the fur trade. Today, questions remain about how their loss has affected our coastal kelp forests, which support a diversity of marine life and a commercial fishing industry.

To learn more about sea otters and their role in maintaining Oregon’s delicate kelp ecosystem, we spoke with Dick Vanderschaaf, associate director of marine conservation for The Nature Conservancy in Oregon.

Oregon Zoo: What is bull kelp, and why is it important?

Dick Vanderschaaf: Bull kelp is a large algal plant that grows in the nearshore ocean. It can grow up to 100 feet long, stretching from the bottom of the ocean up to the surface. When we see bull kelp on the beach, we often see this long hollow stem and leaves or blades growing from the bulbous end. The other end is called a hold-fast, and it’s used to affix the plant to a rocky bottom.

Bull kelp is like a giant tree in the ocean. It essentially forms an undersea forest. Fish and invertebrates and all sorts of organisms live along the blades and the stem. Juvenile fish need high-quality nursery habitats to grow and thrive. Kelp forests provide these habitats and supports stronger fish populations.

OZ: What is the relationship between kelp and sea otters?

D: The kelp exists essentially in a balance within the ecosystem. It provides all the structure for other organisms, but it can be threatened if there is an imbalance. Sea urchins in recent times have been decimating kelp forests all the way from Northern California into Southern Oregon.

Sea otters pretty much need kelp to exist. They live in and among it and they feed on some of the common animals that eat kelp, such as sea urchins. Sea otters eat nearly 25% of their weight every day, so they can eat a lot of urchins. By keeping the urchin population low, sea otters keep the kelp populations healthy. 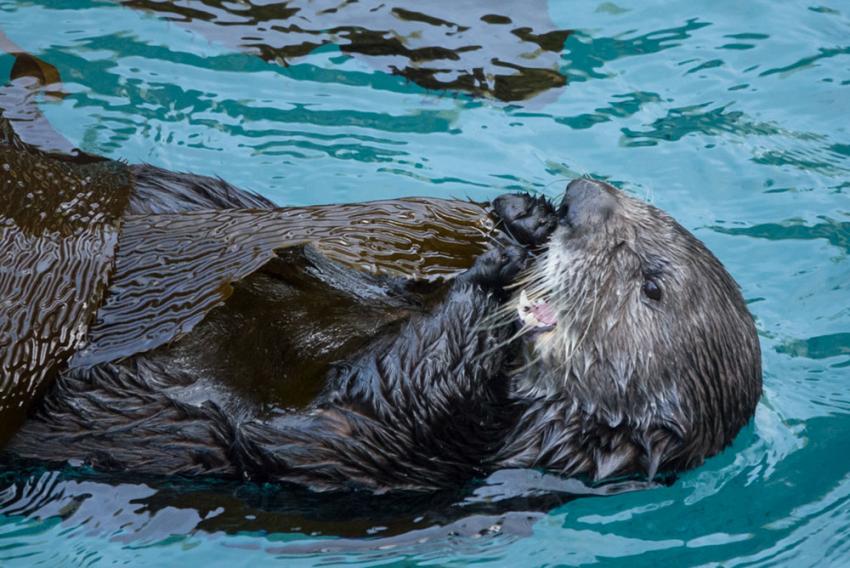 OZ: Sea otters are now extinct in Oregon. What happened to them?

D: Sea otters were a prized animal in the fur trade. They were sought after and killed for their fur, and thus they were wiped out. By 1910, there really were no sea otters left in Oregon. They used to be common on the Oregon Coast, but now the only places you can regularly see them are at the Oregon Zoo and the Oregon Coast Aquarium.

OZ: When sea otters disappeared, what was the impact on Oregon’s kelp forests?

We assume there was an increase in sea urchins and other herbivores that the sea otters would have kept in check, but overall we don't really have a good understanding of what those impacts have been.

OZ: What are the goals of The Nature Conservancy in Oregon’s kelp mapping project?

D: The Nature Conservancy wants to see resilient marine habitats that are well set up to survive and thrive in the face of climate change. We don't have a good picture of where kelp forests currently are, or where they could potentially grow so some basic mapping of kelp along the Oregon Coast is essential.

The kelp mapping project will be using aerial surveys conducted in the 1990s, visual surveys in the marine reserves using scuba or other underwater cameras, and we’ll also include bottom habitat maps and even shoreline maps. This project will not only map where kelp beds or forests currently exist but where there is a potential for them to grow as they restore themselves. We’ll be looking for rocky habitat sites as well as closeness to existing kelp forest sites. The kelp mapping effort is also going to be listing juvenile fish species that are found and associated with these kelp forests.

OZ: Why are sea otters important?

I think it's easy to underestimate the importance of sea otters. We see them as these very curious, fun-loving animals. But we tend to forget that they play this incredibly important role as a keystone species, allowing the kelp forest to thrive and protecting key nursery habitats in the nearshore ocean.