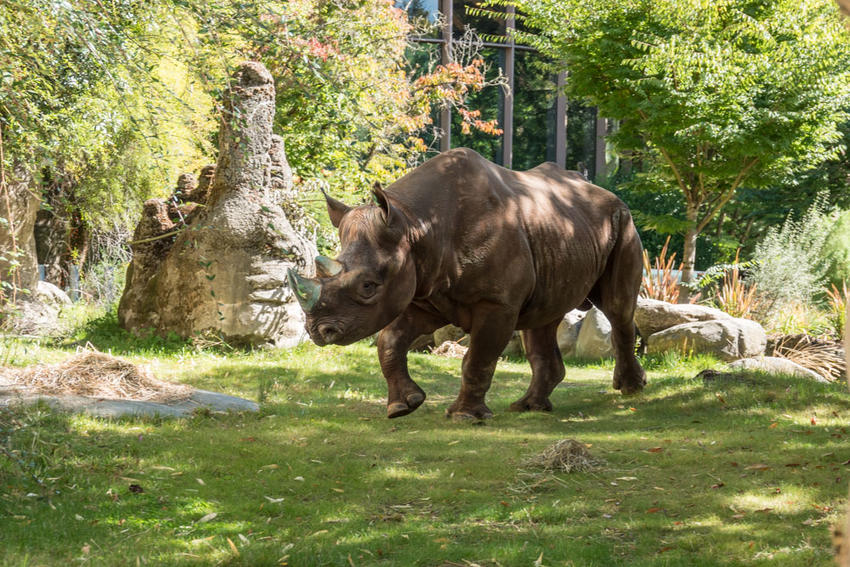 King, an eastern black rhino from Chicago, moves in at the zoo’s new Rhino Ridge

The Oregon Zoo welcomed some big-time royalty recently: King, a 3,000-pound rhinoceros from Chicago’s Brookfield Zoo, arrived in town Sept. 10 and is making himself at home at the zoo’s new Rhino Ridge.

While he’s still getting acclimated, guests may catch sight of King in the outdoor portions of the habitat as he explores his new digs.

“If he’s outside, he’ll be hard to miss,” said Kelly Gomez, who oversees the zoo’s rhino area. “So far, he’s settling in really well, with a lot of attention and encouragement from his care staff.”

“King represents a species that’s among the most endangered on the planet,” Gomez said. “Poaching and the illegal wildlife trade have wiped out 96% of the world’s black rhino population. In South Africa alone, we’re losing almost a rhino a day. Hopefully, we can help inspire a new chapter in the conservation of this incredible species.”

To learn how small actions — everyday decisions about what to buy and do — can help protect this imperiled species, visit oregonzoo.org/help-rhinos.

King was born at Chicago’s Lincoln Park Zoo in 2013, and moved to the Brookfield Zoo in 2016. His transfer to Portland was recommended by the Species Survival Plan for black rhinos, a cooperative program among accredited zoos to promote genetically diverse, self-sustaining populations of threatened and endangered species. A female rhinoceros is expected to join King at Rhino Ridge later this fall.

Rhino Ridge is one of eight major projects made possible by the community-supported zoo bond measure passed in 2008, and was financed entirely through a $1.2 million investment by donors to the Oregon Zoo Foundation’s $8.5 million Heart of the Oregon Zoo campaign. Members, donors and corporate and foundation partners help the zoo make a difference across the region and around the world. To contribute, go to oregonzoo.org/donate.