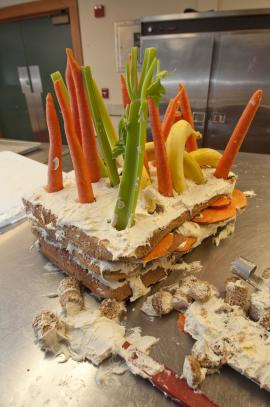 The Oregon Zoo is throwing an elephant-sized party to celebrate the species that made it famous. Elephantastic, held each year on a weekend close to Packy’s birthday, takes place April 16, from 10 a.m. to 4 p.m. at the zoo. During this year’s festivities, the zoo will mark Packy’s 49th birthday.

Elephantastic, free with zoo admission, features a full day of activities, with games, crafts and that ever-popular fashion accessory: elephant ears. Visitors are treated to free birthday cake at noon, courtesy of Lamb’s Wilsonville Market, and kids can enter a drawing for a chance to help keepers deliver Packy’s giant birthday cake.

At 2 p.m., Packy receives his cake and everyone can join in singing the birthday song while the prestigious pachyderm chows down. The cake, baked by the zoo’s executive chef, Paul Warner, is a 40-pound whole-wheat concoction topped with frosting, apples, carrots and celery.

The fun continues through the afternoon with face painting, games, elephant-sized puzzles, crafts and a giant birthday card for Packy.

“The Oregon Zoo is world-famous for its Asian elephant program and the significant contributions it has made toward Asian elephant conservation efforts,” said Kim Smith, zoo director. “It’s only fitting to celebrate our elephants in a big way.”

Packy is one of the oldest Asian elephants in the United States – and one of the largest, standing 10 feet 6 inches tall at the shoulder and tipping the scales at around 12,550 pounds. He has fathered seven calves, including 28-year-old Sung-Surin (“Shine”) and Rama, both of whom currently live at the zoo.