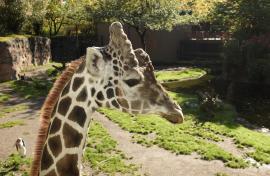 Akeem, a 24-year-old reticulated giraffe at the Oregon Zoo, was euthanized today after veterinarians determined he was suffering and would not be able to recover from an abrupt overnight decline.

"We are deeply saddened by the loss," said Chris Pfefferkorn, Oregon Zoo deputy director. "Akeem had been with us for more than 20 years. He was family."

The cause of Akeem's abrupt decline has not been determined, but veterinarians say there was no sign of disease or traumatic injury, and that it may simply be a case of old age. Just months shy of his 25th birthday, Akeem was considered geriatric for a reticulated giraffe. In the wild, giraffes usually live about 15 to 20 years, but can reach 25. In zoos, they can live to about 28.

Akeem, whose name means "great one" in Swahili, was impressive, standing around 18 feet tall and weighing more than 2,200 pounds. He was a popular resident of the zoo's Africa Savanna exhibit, where he sired three calves over the years.

Pfefferkorn said Akeem had a great day yesterday, enjoying the sunshine and spending time in the yard with Bakari, the zoo's other giraffe. Last night, keepers noted some stiffness in Akeem's gait. Veterinary staff examined him then, and found nothing amiss.

But early this morning, keepers found Akeem lying still in a corner of the giraffe barn. Veterinary staff arrived quickly and tried to get him up and moving, but he was unresponsive, and it soon became clear there was nothing they could do to help.

"We didn't want Akeem to suffer," Pfefferkorn said, "so veterinarians and zoo officials made the difficult decision to euthanize him. As painful as it was for us, it was the right thing to do for him."

"He was a one-of-a-kind animal and we will dearly miss him," said senior Africa keeper Asaba Mukobi, who worked closely with Akeem. "We formed a bond over the years. This is like losing a relative."

Mukobi said Akeem was very popular with zoo staff and visitors, and even got along well with other species like the ground hornbills that share a habitat with giraffes at the zoo.

"And he was a great ambassador for his relatives in Africa," Mukobi added. "Reticulated giraffes are in trouble, and their future depends on all of us working together to make sure they have a place to live."

Reticulated giraffes, also known as Somali giraffes, are native only to Africa and can be found in the southern and eastern regions of the continent. Once found throughout Africa, these gentle giants are rapidly decreasing in numbers due to habitat loss and hunting.

Poaching has decimated giraffe populations. The animals' hair is popular for making bracelets and thread, while their skin is used for shield covers and their sinew for bowstrings. The growth of settlements and human populations has also created a loss of habitat, forcing giraffes out of the savannah. While not currently endangered, reticulated giraffes represent an at-risk species that is quickly losing its wild habitat.

The Oregon Zoo's other giraffe, Bakari, is a 4-year-old male who arrived two years ago from the Cheyenne Mountain Zoo in Colorado Springs, Colo. While Akeem and Bakari had a solid relationship, the two were not especially close, and keepers expect the young giraffe will adjust to Akeem's absence. The Oregon Zoo is awaiting recommendations from the Association of Zoos and Aquariums to determine when additional giraffes might be housed here.