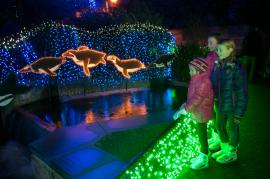 With more than 185,000 visitors pouring through its gates so far this month, the Oregon Zoo is on the verge of an attendance milestone: Sometime before 8 p.m., the zoo expects to welcome its 50 millionth visitor since 1959, the year it moved to its current Washington Park location.

To mark the occasion, visitors arriving for this evening's ZooLights can enter a drawing to win a prize package that includes a one-year family membership to the zoo, an assortment of gift items from the Zoo Store and the opportunity to help deliver Packy the elephant's 50th birthday cake this spring.

Earlier this month, helped by a record-breaking ZooLights, the zoo's annual attendance shot past the 1.5 million mark for the fifth consecutive year. The first time the zoo's attendance topped a million was during 1962, the year Packy was born. It wasn't until 1989 that the zoo broke the million mark again. Since then, it has welcomed more than a million guests in 20 of the past 23 years. The zoo continues to have the highest attendance of any fee-based tourist attraction in Oregon.

ZooLights has set its own attendance record for the third year in a row. Since opening Nov. 25, the popular holiday light display has drawn 175,090 visitors with five days still left in this year's run. The previous best for the festival, set in 2010, was 141,716 visitors. On Dec. 22, ZooLights had its highest single-day attendance ever with 10,014 visitors, breaking a record that was less than a week old.

ZooLights' popularity has also helped the zoo top its overall attendance record for the month of December. As of Dec. 26, monthly attendance stood at 184,862. The previous record for December, set in 2006, was 149,946.

The traditional holiday light show has delighted visitors for more than two decades with its dazzling life-size animal silhouettes, moving sculptures, forests of lighted trees and light-bedecked steam train. In keeping with the zoo's commitment to sustainability, most of the lights displayed are LEDs, which use only a fraction of the power of standard holiday lights.