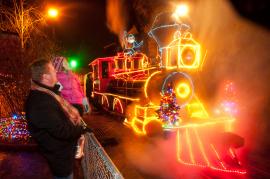 With more than 7,000 visitors pouring through the gates to take in ZooLights Tuesday, the Oregon Zoo's annual attendance shot past the 1.5 million mark for the fifth consecutive year.

Zoo officials say the popular holiday light display is on its way to a record-breaking run for the third year in a row, and could pass last year's record total by early this evening. Since opening Nov. 25, ZooLights has drawn around 138,000 visitors, a little more than 3,000 shy of last year's record, with more than a week of lights to go.

ZooLights had its highest single-day attendance ever on Dec. 17, as 9,666 visitors took in the bright lights.

"The response has been phenomenal," said Kim Smith, zoo director. "Even if we stopped counting visitors today, 2011 would already rank as the second-best ZooLights ever and one of the top five attendance years overall."

The zoo has set attendance records in each of the past five years, with an all-time high 1,645,843 visitors coming through the gates in calendar-year 2010. The Oregon Zoo continues to have the highest attendance of any fee-based tourist attraction in Oregon.

The traditional holiday light show has delighted visitors for more than two decades with its dazzling life-size animal silhouettes, moving sculptures, forests of lighted trees and light-bedecked steam train. In keeping with the zoo's commitment to sustainability, most of the lights displayed are LEDs, which use only about 1 percent of the power of standard holiday lights.