Bowlers line up to help save endangered rhinos 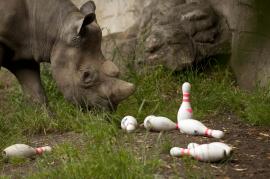 No luck getting a strike at the bowling alley? How about aiming for a spare instead? Spare change for a good cause, that is. The 23rd annual Bowling for Rhinos fundraiser takes place Saturday, June 9, from 3:30 to 6 p.m. at Sunset Lanes in Beaverton.

"Bowling for Rhinos is a great opportunity to bust out the bowling shoes while helping a species in need," said Michael Illig, Oregon Zoo curator and local coordinator for the fundraiser.

Part of the American Association of Zoo Keepers' national "bowl-a-thon" and its largest conservation fundraising event, Bowling for Rhinos has raised more than $4 million over the past two decades. Portland-area bowlers are responsible for nearly $223,000 of that – the second-highest total of any AAZK chapter in North America.

"The number of rhinos left in the world is critically low," Illig said, "so group efforts like Bowling for Rhinos can make a big difference around the world."

More than 100 species of rhino once existed, but only five remain today, Illig noted. White rhinos have the most stable population at 20,000, but fewer than 200 Sumatran and 50 Javan rhinos remain in the wild.

Teams and individuals can register to participate by emailing PortlandAAZK@aol.com. The deadline to register is May 25. Bowlers raise funds by gathering tax-deductible pledges from friends, family and anyone who wants to keep rhinos from extinction. While bowlers are not required to collect pledges to participate, every dollar makes a difference for rhinos. A $10 participation fee includes shoe rental and three games of bowling. The Portland event features door prizes and raffles for a variety of items, and five free raffle tickets are awarded for every $100 collected in pledges.

Illig said this year's event is dedicated to the memory of Pete, a beloved Oregon Zoo black rhino who died in February.