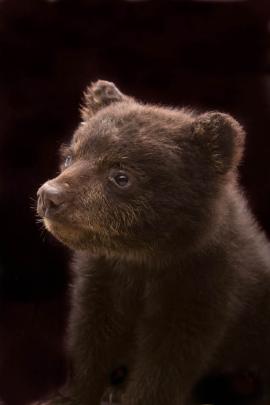 State officials urge Oregonians to leave wildlife in the wild

"Michelle, we need your help."

So began a conversation that Michelle Schireman, an Oregon Zoo keeper known for taking in orphaned cougar cubs, realized would upend her life, both professionally and personally, for a while. It was her day off from the zoo, and the Oregon Department of Fish and Wildlife was calling her at home.

As Schireman recounted that surprise phone call to zoo staffers a couple days later, a furry black animal about the size of a Labrador puppy wobbled Bambi-like around her boots, unsure of where to go next. Its tiny size, downy fur, and attachment to a nearby beaver plush toy suggested something harmless. But the sharp teeth and long claws confirmed its true identity: American black bear – and, of course, the reason for ODFW's call.

On April 23, state wildlife officials fielded a call from a Medford, Ore., family that had taken a young bear cub from the wild and brought it into their home. With no idea how to care for the helpless yet wild animal, they turned to professionals. Those professionals turned to Schireman.

The animal keeper, who serves as the Association of Zoos and Aquariums' population manager for cougars, has fostered orphaned cougar cubs for several years, having placed nearly 75 during her time with the Oregon Zoo.

"I'm usually the first person fish and wildlife departments call when orphaned cougars are found in the wild," Schireman said. "Young cougars can't survive without their mothers, so I work with accredited zoos to find them new homes."

Schireman's big heart and animal-care expertise led wildlife officials to believe she might find a home for this young bear cub too.

She got permission to house the cub temporarily at the zoo's Veterinary Medical Center during her workday, taking him home with her at night since the cub was still of nursing age and required around-the-clock care. At just a couple of months old, the bear weighed 4 pounds – about the same as a half-gallon of milk – which, surprisingly, is normal for an animal that could grow to be 6 feet tall and weigh up to 600 pounds. 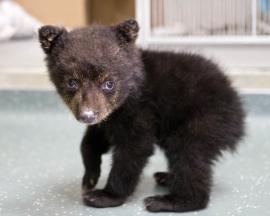 Meanwhile, Schireman put ODFW in touch with the AZA's taxon advisory group for black bears, which manages conservation issues for the species. Within 24 hours, the NEW Zoo in Suamico, Wisc., home to an adult black bear named Winnie, was preparing for a new addition. And about a week later, the cub was sent off to his new home, where he now goes by the name Aldo.

"I'm glad they were able to find a home for him so quickly," Schireman said. "When ODFW called, I told them the Oregon Zoo already had a full house with four black bears. But I hoped there was a zoo out there that would be thrilled to take him in."

Black bears are omnivorous and have a diverse diet including fruit, plants, berries and grasses; they are not usually active predators. Oregon is home to about 25,000 to 30,000 black bears, which are North America's most common bear species.

The Oregon Department of Fish and Wildlife advises Oregonians to leave wildlife in the wild.

"If you see a young animal alone, leave it where it is," said Meg Kenagy, ODFW conservation strategy communications coordinator. "It's likely that its mother is nearby. Most animals leave their young to forage or hunt."

Removing a young animal from the wild is illegal and greatly reduces the animal's chance of survival. If you see a sick or injured animal, contact ODFW, Oregon State Police or a licensed wildlife rehabilitator. Learn more about young wildlife.

Related links:
Learn about black bears at the Oregon Zoo