The Oregon Zoo's 12-year effort to save the endangered Columbia Basin pygmy rabbit will draw to a close on Thursday, July 19, when the zoo releases its last 14 breeding rabbits and their offspring at the Sagebrush Flat Wildlife Area in eastern Washington.

"We've helped give these rabbits a chance for survival, and now it's time to send them off into the world," said Michael Illig, Oregon Zoo animal curator. "Our hope is that they'll continue to breed and establish a stable population at Sagebrush Flat. A strong pygmy rabbit population there will keep the local community involved and help preserve the habitat."

The recovery program ends on a high note for these federally endangered bunnies. Nearly 30 kits were born under the Oregon Zoo's watch this year. The rabbits, currently housed at the zoo's Jonsson Center for Wildlife Conservation in rural Clackamas County, are headed for a six-acre transitional enclosure at Sagebrush Flat that will acclimate the animals to their surroundings, encourage breeding and protect them from predators. Rabbits recently released from the enclosure have been tracked and are successfully living in the area – a good indication for future population growth, according to Illig.

The pygmy rabbit is America's smallest native rabbit, weighing less than one pound when fully grown, and is the country's only burrow-digging and sagebrush-climbing rabbit. The shy species is dependent on sagebrush, which makes up the majority of its diet and grows in deep, loose soil, where the rabbits dig burrows. 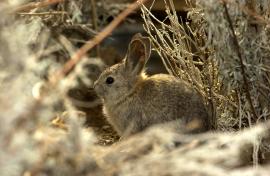 The Oregon Zoo's involvement with pygmy rabbit breeding began in 2000 when it received four wild-caught rabbits from Idaho to see whether they could be bred in captivity. Zoo staff constructed behind-the-scenes habitats full of loose soil, with tubes to serve as hiding places for the reclusive rabbits. They also constructed nest boxes fitted with infrared video cameras to monitor the rabbits' behavior. Using video recorders, scientists studied their activity patterns exhaustively, learning subtle behavioral nuances.

In 2001, the research paid off as the Oregon Zoo became the first zoo in the world to successfully breed pygmy rabbits. Thereafter, the zoo bred Washington's endangered Columbia Basin pygmy rabbit. With breeding protocols established, the zoo shared its research with the Washington Department of Fish and Wildlife. The protocols helped the WDFW develop its pygmy rabbit breeding facility at Washington State University in Pullman as well as the program at Northwest Trek, a Washington zoo specializing in native species.

Since then, more than 1,600 pygmy rabbits have been born among the three institutions. More than 600 of these lived long enough to receive names and many went on to breed and produce offspring. One female, named Shasta, gave birth to 67 kits and lived more than five years (average life expectancy is three years). Washington pygmy rabbits were crossed with Idaho, Nevada and Oregon rabbits to increase genetic diversity and reduce inbreeding. The last purebred Columbia Basin pygmy rabbit, named Bryn, died in 2008.

In March, the zoo and its conservation partners collected 47 wild pygmy rabbits from Utah and Nevada and released most of them at Sagebrush Flat. Conservation officials hope the wild rabbits will breed with rabbits raised at the zoo. This cross-breeding will strengthen the endangered Columbia Basin pygmy rabbit stock and increase its chance of a successful recovery.

"Pygmy rabbits are at the bottom of the food chain, and their habitat has many predators and risks," said David Shepherdson, the zoo's deputy conservation division manager. "But if they continue to breed, and if we continue to restore their habitat, we're hopeful we can give these rabbits a good chance to survive."