Zoo will say goodbye to its beloved gray wolves 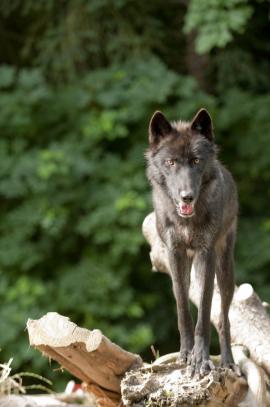 Cheyenne, Kenai Jr. and Yazhi will head to Nebraska conservation park in August

Visitors to Sunset at the Zoo were treated to all manner of music yesterday. In addition to the Cuban-style salsa of Los Rumberos de Caribe and the genre-blurring classicism of the Portland Cello Project, guests wandering near the Oregon Zoo's Trillium Creek Family Farm around sunset caught a "howlelujah chorus" from the zoo's trio of gray wolves. Cheyenne, Kenai Jr. and Yazhi lent a stirring three-part harmony to the festivities, their eerily beautiful howls rising from Wolf Meadow and reverberating across the hillsides of Washington Park.

It was a bittersweet sound for many zoo staffers: In August the wolves will be departing for the Lee G. Simmons Conservation Park and Wildlife Safari in Omaha, Neb. — part of the Henry Doorly Zoo and Aquarium — as the Oregon Zoo prepares for work on a vastly expanded home for its Asian elephant herd. The new elephant area will stretch over much of the meadows and forests along the zoo's eastern edge, and there will no longer be room for a sufficiently engaging wolf habitat.

"It's hard for us to see these wolves go, and we know visitors will miss them too," said Amy Cutting, curator of the zoo's North America exhibits. "But we would rather lose them to a better environment than keep them in a less than ideal space. Their new home will provide a large territory with hills and trees, so we're very happy about that." 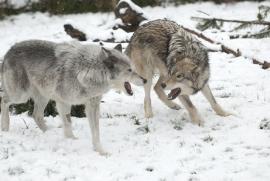 While the wolves will be missed here, their arrival is eagerly anticipated by keepers in Omaha, some of whom will spend time in Portland, familiarizing themselves with each wolf's needs and habits before transporting them to their new digs.

The Oregon Zoo remains committed to wolf education, Cutting said. Wolves will be prominently featured on informational displays throughout the Great Northwest exhibit. Staff and visitors can also look forward to welcoming wolves back in the future: As part of the zoo's 20-year master plan, the mountain goat and black bear habitats in Great Northwest will be completely renovated to provide a large, flexible space that can be used alternately by black bears, cougars and gray wolves.

Cheyenne, Kenai Jr. and Yazhi will be at the Oregon Zoo at least through next week for visitors who wish to say goodbye. The wolves leave for the Midwest the week of Aug. 6.