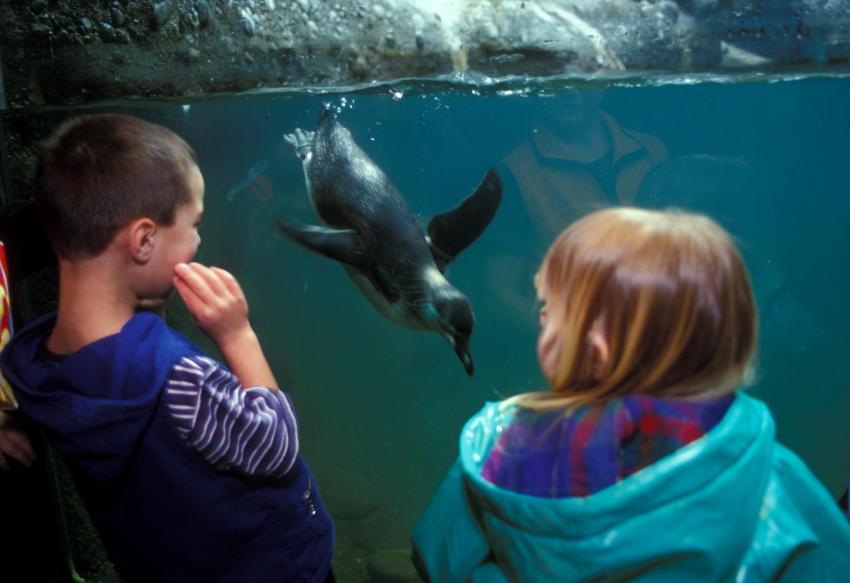 With upgrades to their Penguinarium complete, the popular birds return home

Flightless birds aren’t typically migratory, but don’t tell that to the 16 Humboldt penguins making their home at the Oregon Zoo.

For much of the past two years, the penguins shared a divided portion of the zoo’s polar bear habitat while improvements were made to their own quarters. This week the sleek seabirds returned home, waddling over the familiar rocky terrain and darting through the clear water of the zoo’s Penguinarium. The popular exhibit will reopen to the public on Saturday, Nov. 17.

The birds had been moved to their temporary habitat in late 2010, allowing work to begin on a much-needed upgrade of the Penguinarium’s water-filtration system, one of many sustainability improvements funded by the community-supported 2008 zoo bond measure. The upgrade saves 7 million gallons of water each year.

Built in 1959 and remodeled in 1982, the Penguinarium had an outdated water-filtration system that dumped millions of gallons of water into the city’s sewer system each year. A constant flow of fresh water was required to keep the pool clean and free of scum that builds up from the oils in penguin feathers. And each week, the 25,000-gallon pool was completely drained for cleaning. 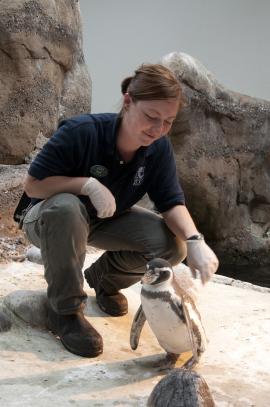 “The filtration upgrade was completed in December 2011 and worked perfectly,” said curator Michael Illig, who oversees all the zoo’s birds. “It was cleaning and circulating beautiful clear water.”

When staff turned on the exhibit’s 20-year-old heating and air conditioning system in anticipation of the penguins’ return, however, they found it wasn’t functioning properly.

“Since the penguins were already comfortable in their temporary digs, it was a good opportunity to repair the system with no impact to the birds or zoo visitors,” Illig said. “We wanted to make sure their home was 100 percent ready when they moved back.”

Also moving back home this month were 15 Inca terns, South American seabirds that share an exhibit space with penguins at the zoo. (The two species coexist in the wild as well.) The terns had been waiting out the renovations in an enclosure that had housed orangutans prior to the 2010 opening of Red Ape Reserve.

“It’s great to have the birds back together in their own space,” said Gwen Harris, the zoo’s senior keeper of birds. “Their welfare has always been our primary concern. Now the water’s clean and clear, and we’ve made a far more environmentally friendly habitat.”

Humboldt penguins (Spheniscus humboldti), which live along the South American coastline off of Peru and Chile, were granted protection under the U.S. Endangered Species Act in 2010. Of the world’s 17 penguin species, Humboldts are the most at risk, threatened by overfishing of their prey species, entanglement in fishing nets, and breeding disruption due to commercial removal of the guano deposits where the penguins lay their eggs. Their population is estimated at 12,000 breeding pairs.