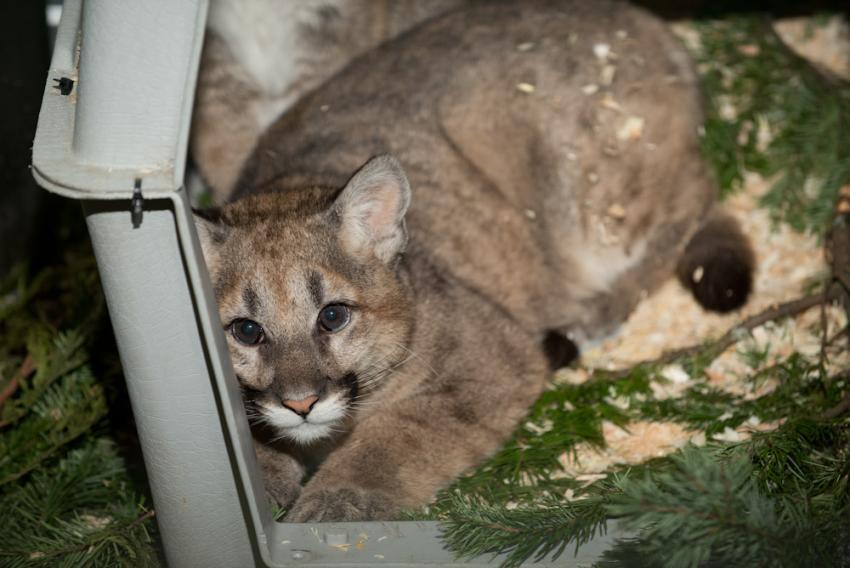 After a brief Portland layover, cubs will find permanent home at Chattanooga Zoo

A pair of young cougar cubs found orphaned and starving near Missoula, Mont., have briefly taken up residence behind the scenes at the Oregon Zoo while they await a flight out of town this evening en route to a new, permanent home at Tennessee's Chattanooga Zoo.

Oregon Zoo keeper Michelle Schireman described the 5-month-old siblings, one male and one female, as "intensely cute, but far from cuddly."

"The cubs are about as large as medium-sized dogs, with paws as big as bread plates," Schireman said. "They still have a bit of blue about their eyes and the fuzzy spotted coats you see on younger cougar cubs, but both the blue and the spots have begun to fade."

Montana wildlife officials said the pair had been seen around the Missoula area over a period of several weeks, occasionally attempting to raid poultry yards and with no mother in sight. They were eventually captured inside a chicken coop by local residents, who took them to Montana's Fish, Wildlife and Parks service.

Montana FWP officials quickly contacted Schireman, who serves as the Association of Zoos and Aquariums' population manager for cougars, and she worked to find them a home at the Chattanooga Zoo.

"I'm usually the first person fish and wildlife departments call when orphaned cubs are found in the wild," Schireman said. "Without a mother, young cougars lack the skills and resources needed to survive on their own."

Wildlife officials don't know what happened to the cubs' mother, but the two were emaciated when they were first rescued, Schireman said. After two weeks at FWP, with good veterinary care and a steady food supply, they have filled out quite a bit. The male cub now weighs 37 pounds and the female weighs 32.

The rescued cubs have formed a strong bond, and zoo and wildlife officials wanted to keep the pair together during the trip to Tennessee. Since no airport close to Missoula could ship a crate large enough for two cougars, Schireman and Oregon Zoo curator Michael Illig drove to Spokane Jan. 24 — meeting Montana FWP agents halfway — and brought the cubs to Portland, where they'll catch a flight out of PDX this evening.

Orphaned cougars rescued from the wild

"They're pretty calm considering what they've been though," Schireman said. "They started eating right away the first night they were here."

Staff at the Chattanooga Zoo are excited to greet the newcomers.

"They have long history of excellent care and a space all ready for these cubs," Schireman said. "They had been housing two adult cougars, both quite old, but one of them died last August. The remaining one, a male about 13 years old, will be housed in an adjacent area, separate from the young pair."

In 2011, Schireman received a Certificate of Merit in Conservation from the National Association of Zoo Keepers. The award recognized her "outstanding work developing an orphaned animal placement program that gives assistance to state wildlife agencies and zoological institutions in placing orphaned pumas." She has served as puma population manager for about 20 years, finding homes for more than 70 orphaned cougars during that time. Most of the cougars currently living in U.S. zoos are orphans placed by Schireman.

Cougars — also known as mountain lions, pumas and (in Florida) panthers — live mostly in the western United States and Canada. They weigh from 75 to 150 pounds and have a carnivorous diet both in the wild and at the zoo. Females are either pregnant or raising cubs for the majority of their lives. After three months of gestation, two to three cubs are usually born in a litter and live with their mother for up to two years.