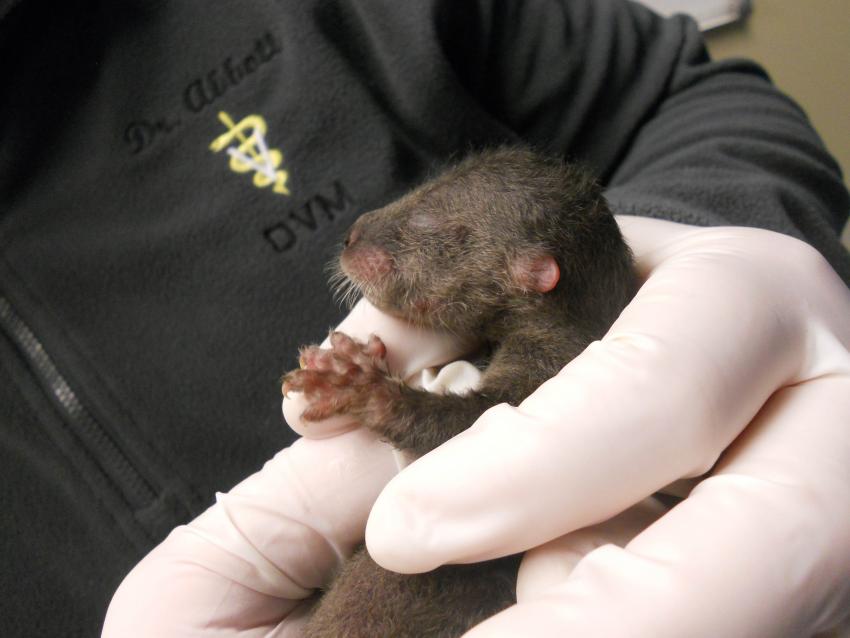 Look out, Lily: A 12-ounce newcomer is eyeing your title as the Oregon Zoo's most adorable baby. Or at least he will be, once he opens his eyes.

Tilly, one of the zoo's two North American river otters, gave birth to a male pup Jan. 28 — the first river otter to be born at the Oregon Zoo. The new arrival weighed just over 4 ounces at birth and has already tripled that due to his mother's naturally high-fat milk. Keepers have yet to decide on a name for the pup, though it is likely he will be named after a local river or waterway.

If all goes well, zoo visitors should be able to see Tilly and her pup in the Cascade Stream and Pond section of the zoo's Great Northwest exhibit in a few months. Until then, otter fans are encouraged to follow the zoo on Facebook and Twitter for updates on the pup's progress. 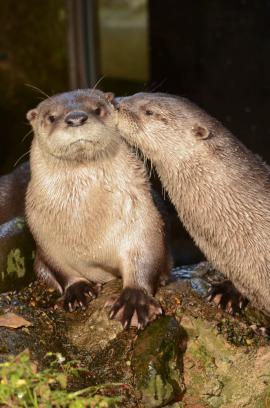 It's usually three to six weeks before young otters open their eyes, and about five weeks before they first walk. Surprisingly, swimming does not come naturally to otters — pups must be taught to swim by their mom. Fortunately, Tilly has taken to motherhood like ... well, like an otter to water.

"Tilly is doing all the right things and appears calm and comfortable," said Amy Cutting, zoo animal curator. First-time moms of any species are not always successful though, Cutting cautioned. Keepers are tempering their optimism and keeping a close watch on Tilly and her pup.

"We give her access to the exhibit during the day," said Julie Christie, senior keeper for the zoo's North America area. "But Tilly is very attentive to her pup and doesn't spend more than a few minutes away before going back to check on him."

Otters typically have two or three pups in a litter, Cutting said, so a single pup is unusual though not unheard of. The range is one to six. Having just one baby to care for will allow Tilly to provide ample attention and nutritional resources to her newcharge, she added.

Since both Tilly and the pup's father, B.C., were born in the wild, they are considered genetically important for the breeding otter population in North American zoos. Both parents are rescue animals who had a rough start to life.

"She was a tough little otter," Cutting remembered. "She was in really bad shape when she was found, so it's great to see her doing well now and raising a pup of her own. So far, she's been a wonderful mom."

The pup's father, B.C. (short for Buttercup), was found orphaned near Star City, Ark., also in 2009. He was initially taken in by the Little Rock Zoo, but transferred here the following year as a companion for Tilly. The two otters hit it off quickly and have been playful visitor favorites ever since.

"Otters are not always compatible, so we feel very lucky that these two get along so well," Cutting said. "We hope the new pup will be the first of many for them."

Now that the threat from fur trappers has declined, North American river otters are once again relatively abundant in healthy river systems of the Pacific Northwest and the lakes and tributaries that feed them. Good populations exist in suitable habitat in northeast and southeast Oregon, but they are scarce in heavily settled areas, especially if waterways are compromised. Because of habitat destruction and water pollution, river otters are considered rare outside the Pacific Northwest.