As spring break nears, flamingos are set to 'flock this way' 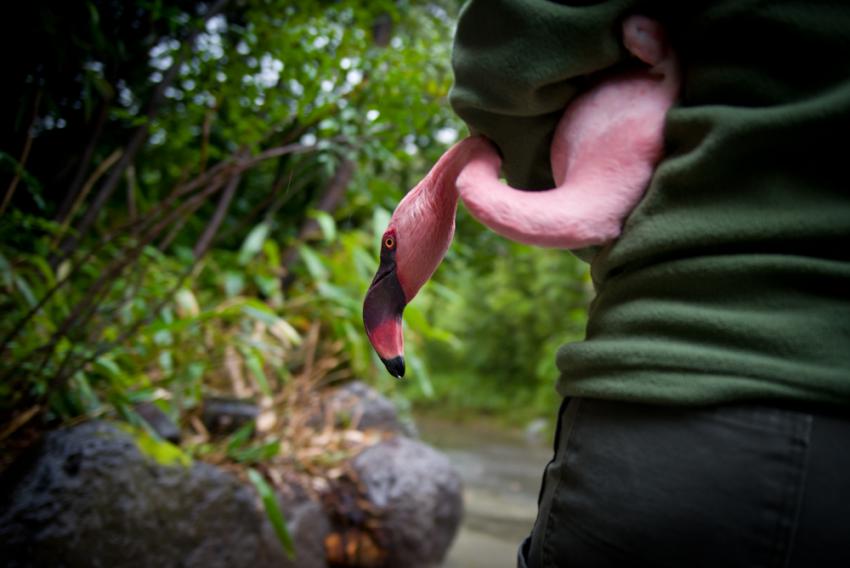 No need to book that trip to Miami: For spring break this year, locals can get their flamingo fix at the Oregon Zoo. This morning, 21 lesser flamingos waded into the newly remodeled Africa Rainforest aviary, where the pink birds can be seen by zoo visitors starting March 23.

"I'm sure this gorgeous flock will be a visitor favorite," said curator Michael Illig, who oversees the zoo's birds. "The flamingos have been settling in well, exploring the habitat and getting to know their new neighbors, the ibises and ducks."

The flamingos, which arrived here from the San Antonio Zoo last month, will spend the next couple of weeks getting accustomed to their new aviary, while the zoo's animal-care staff monitors the birds' health and safety. 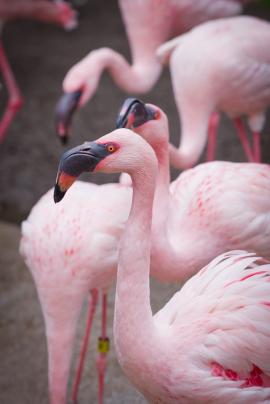 Local residents may not be used to seeing pink flamingos — except for the lawn variety. The birds have not been part of the Washington Park landscape since the early 1950s, when three flamingos were given to the zoo by the Meier & Frank Co. Illig says it's fitting this flock will make its Oregon Zoo debut just in time for spring break, since flamingos often put people in mind of Miami and other getaway destinations.

Lesser flamingos feed on spirulina, a blue-green bacteria, which thrives in alkaline lakes and contains the photosynthetic pigments that give the birds their pink color. At the Oregon Zoo, the flamingos will eat a specialized diet that contains the algae they need. They'll scoop food out of the lagoon in much the same way they do in the wild, dipping their beaks upside-down into the water and sweeping them back and forth to filter food.

The smallest species of flamingo, the lesser flamingo (Phoenicopterus minor) stands nearly 3 feet tall and weighs 3 to 6 pounds, with a wingspan up to 41 inches. All of the flamingos at the zoo now are males, but Illig says the plan is to add females and begin a reproductive program in the future.

With a global population of more than 2 million, the lesser flamingo is not considered an endangered species. There is cause for concern, though: Some of the birds' main breeding sites are facing risks due to industrial pollution and human encroachment.

The primary habitats of the lesser flamingo are shallow, brackish lakes in the Rift Valley of eastern Africa, where three-quarters of the population is born. A smaller population lives in India. The birds have specialized salt glands that allow them to excrete excess salt they ingest, letting them take advantage of habitats other animals cannot.

The remodeled Africa Rainforest aviary boasts a pool designed specially for them, a new nesting area, and separate holding areas for the flamingos and the other birds that share the aviary. The renovation is part of a larger, donor-funded aviary upgrade project. Cascade Marsh, in the Great Northwest habitat area, is also reopening after a renovation that included new netting, a new vestibule and pole caps to preserve the aviary structure.

The aviary improvements were funded by individual, corporate and foundation contributions through the Oregon Zoo Foundation and included grants from the Spirit Mountain Community Fund, The Collins Foundation, Samuel S. Johnson Foundation and the Wessinger Foundation.