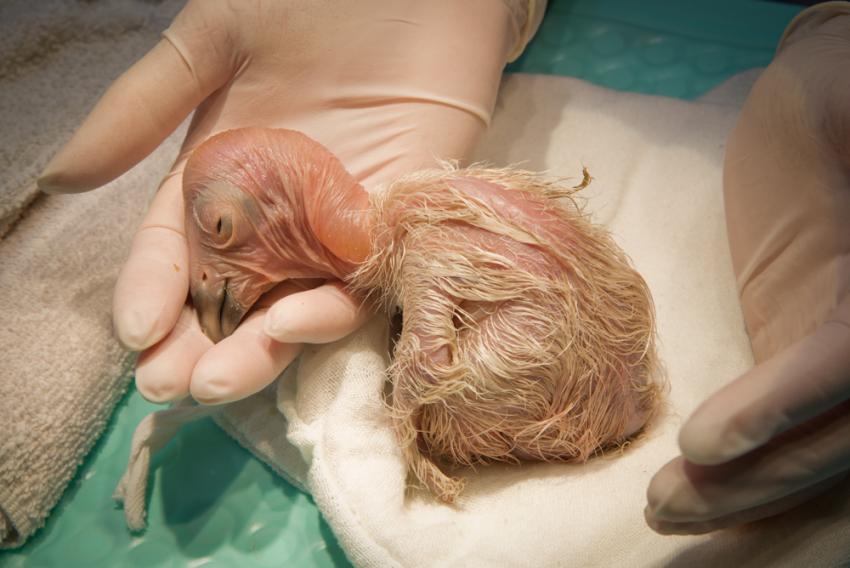 The Oregon Zoo's newest spring arrival — a critically endangered California condor chick — hatched on April 11 at the zoo's Jonsson Center for Wildlife Conservation, but not without a little help.

Zookeepers and veterinarians performed an emergency "assisted hatch," helping the little bird out of its egg and into the world. The chick had become stuck in the wrong position for hatching, unable to move inside its shell, and would not have survived much longer without the intervention.

"We only do this as a last resort," said Kelli Walker, the zoo's lead condor keeper. "It's kind of the condor equivalent to an emergency C-section. There are so few of these birds in the world that each new chick is incredibly important to the recovery of the species."

The egg, laid on Feb. 14, had been placed in an incubator to keep it safe until the hatch, while the condor parents, Malibu and Maluk, sat on a dummy egg. Usually, Walker waits for the chick to begin rotating in its shell, then returns the egg to its nest to hatch beneath the parents. This egg, though, proved unusual.

On April 7, monitoring the egg through a process called candling — using a bright light source behind the egg to show details through the shell — Walker could see that the chick was getting ready to hatch. At this point, keepers can usually see a "pip," or mark, inside the shell, where the chick has begun chiseling its way out, but no internal pip was visible.

The next day, Walker saw that the chick was turned 180 degrees from normal hatching position. Since it was able to breathe and was still getting nutrition from the egg, Walker waited to see if it would rotate properly, but two days later there was still no change. The chick was stuck.

Growing concerned, Walker contacted zoo veterinarian Mitch Finnegan. Realizing that the chick would be unable to hatch alone, the two gently removed a portion of the shell and the chick popped its head out.

After a health checkup and a night spent in ICU, the chick was placed in the shell of a nonfertile egg Walker had saved from the previous year, and swapped for the dummy egg in the parents' nest box.

"The chick was extremely mad and vocal, which is good," Walker said. "I think Maluk must have heard it vocalizing, because he came into the nest area right away and started brooding. The chick seems to be doing well and is very active." 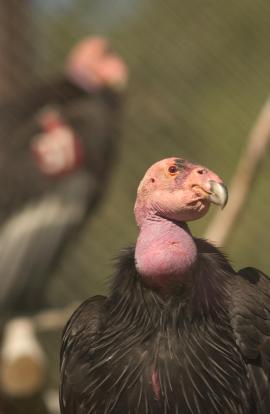 The assisted hatch is the zoo's first successful hatch of 2013. More than 30 healthy chicks have hatched at the Jonsson Center since the program began in 2003, and 23 Oregon Zoo-reared birds have gone out to field pens, with most released to the wild. In addition, several eggs laid by Oregon Zoo condors have been placed in wild nests to hatch.

Condors are the largest land birds in North America with wingspans of up to 10 feet and an average weight of 18 to 25 pounds. They are highly intelligent and inquisitive, and they require a tremendous amount of parental investment in the wild. Although it was one of the original animals included in the 1973 Endangered Species Act, by 1982 there were only 22 California condors in existence, all of which were taken into captivity to prevent the birds from dying out.

As a scavenger that feeds off animal carcasses, the condor is an important player in nature's cleanup crew. Other endangered species also are benefitting from the conservation of California condors because large areas of land have been protected as condor habitat.

Accumulated lead poisoning — a problem that plagues all raptors and scavengers — is the most severe obstacle to the California condor's recovery as a species. As the birds feed on carrion and other animal carcasses, they can unintentionally ingest lead from bullet fragments. Lead consumption causes paralysis of the digestive tract and results in a slow death by starvation. Lead also causes severe neurological problems, so the birds not only starve but suffer from impaired motor functions.

The last condor seen in Oregon was near the town of Drain in 1904. The birds held out a little longer in California, but by 1987, the last condors were taken into captivity in an attempt to save the species. Biologists decided to place the remaining condors in a captive-breeding program.

A new California condor habitat will open at the zoo early next year, allowing visitors to get a look at nonreleasable condors and learn more about these iconic birds.