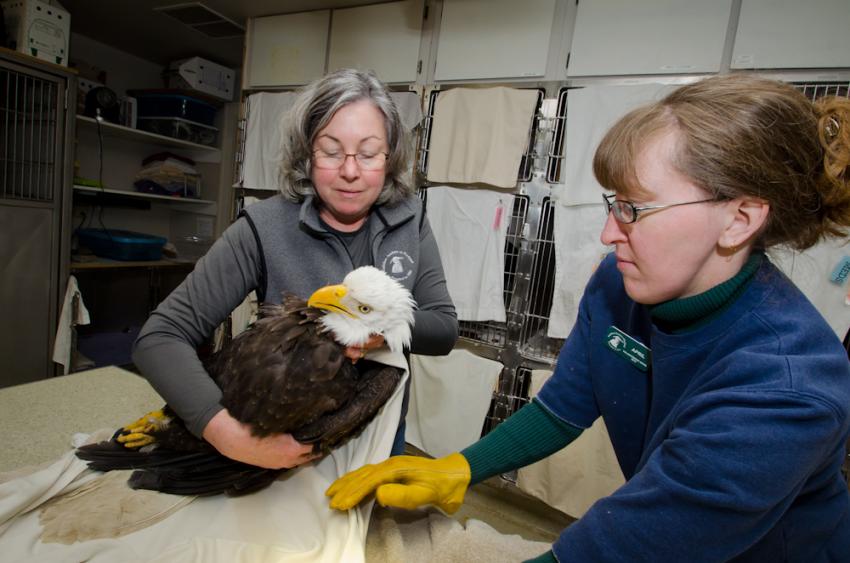 Though banned from paint, gas and plumbing pipes, lead remains a threat to wildlife

On May 13, the Audubon Society of Portland's Wildlife Care Center received a call about a bald eagle that seemed unable to fly. Care center operations manager Lacy Campbell headed to the site in Longview, Wash., fording a creek to bring the 3-foot-tall bird back to Audubon, where a blood test revealed it to be suffering from severe lead poisoning. The eagle is not only in treatment now at Audubon, but is also contributing to research that may help protect other wildlife from lead.

"Reducing wild animals' exposure to lead in Oregon is one of our long-term goals," said Bob Sallinger, Portland Audubon conservation manager. "And getting a handle on how many local birds are being affected and killed by the toxin is an important first step."

In January, with an assist from the Oregon Zoo, Audubon launched a study of lead's impact on local birds like this eagle. For every raptor the care center admits, staff members draw a blood sample, running it through a state-of-the-art machine that tests for lead, and recording the results in a growing database to track the extent of exposure in local raptor populations.

The research is made possible by a grant from the zoo's Future for Wildlife program, which funded Audubon's purchase of the Lead Care II machine — a small countertop device that in less than three minutes can determine the amount of lead in a drop of blood.

Lead poisoning, despite the damage it wreaks on birds' nervous and digestive systems, is tricky to diagnose without a blood test. Poisoned raptors may have easy-to-identify symptoms like paralysis and seizures, but some exhibit inconclusive symptoms like lethargy. Others die without showing any symptoms at all. 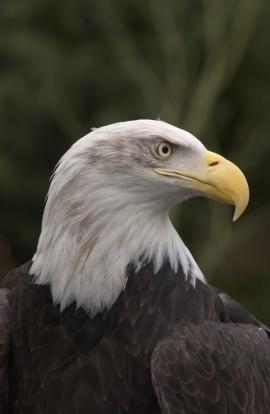 "Thanks to the blood tests, we're catching cases that we couldn't have diagnosed based on symptoms alone," said Portland Audubon veterinarian Deb Sheaffer. "This is not only crucial for our research, but it also means we can do a better job of treating individual birds in the care center. The tests will help us save more patients."

If the bald eagle currently in Audubon's care lives, it will be the blood test that saved it, Sheaffer said. The speedy results allowed staff to immediately start chelation therapy – the eagle was injected with a substance that binds with lead and then bundles it into a form the body can safely pass out. According to Sheaffer, the bird's lead levels were so high that even a small delay in treatment could have been fatal.

The tests will also help the care center treat and track birds with lead levels much lower than the eagle's.

"Even if the amount of lead in a bird's body might not kill it outright, we suspect the toxin can still lead to injury and death by making a bird more susceptible to threats," Sheaffer said. "For example, the lead might suppress a bird's immune system, making it more susceptible to disease. This research project is our first chance to look at the impact of low- to mid-range lead levels on raptors."

In addition to raptors, Audubon's care center is testing all ravens and vultures that come through the door. Taken together, these are the Portland-area birds most likely to eat the remains of animals shot with lead ammunition, ingesting fragments of ammunition along with the carcasses. This is likely what happened to the poisoned eagle, Sheaffer said — not only did it have high levels of lead in its blood, but an X-ray revealed metal in the bird's stomach.

Since January, the care center has collected lead levels from 12 species. The first round of results will be analyzed and published at the end of this year; more than 200 raptors, vultures and ravens pass through the care center in an average year, a good sample size for the study.

"Lead has been banned from paint, gasoline and plumbing pipes," said Bob Sallinger, Portland Audubon conservation director. "We've known for decades that it is toxic to wildlife and humans, but it's still legal to use lead ammunition in our state."

"We are excited to be able to help Portland Audubon monitor and treat lead levels in the birds they receive," said David Shepherdson, Oregon Zoo deputy conservation manager. "Suffering and death by poisoning from spent lead ammunition is suspected to be a problem not only for protected species like the bald eagle but for many other wild animals. The work Portland Audubon is doing will help us understand the true scale of the problem. People can reduce the exposure of wildlife to lead by choosing nontoxic ammunition, such as copper, and by burying gut piles."

Accumulated lead poisoning is also the most severe obstacle to the comeback of endangered California condors, a species the zoo is helping to recover at its Jonsson Center for Wildlife Conservation.

The Audubon Society of Portland's Wildlife Care Center is the oldest and busiest wildlife rehabilitation facility in Oregon. Each year, the care center treats more than 3,000 animals for release back into the wild and responds to more than 15,000 wildlife-related inquiries. The facility's goal is to give injured animals a second chance at life in the wild and to reduce wildlife hazards in the community. The care center also conducts research about the problems affecting urban wildlife populations.