Zoo's Humboldt penguin chicks get into the swim of things 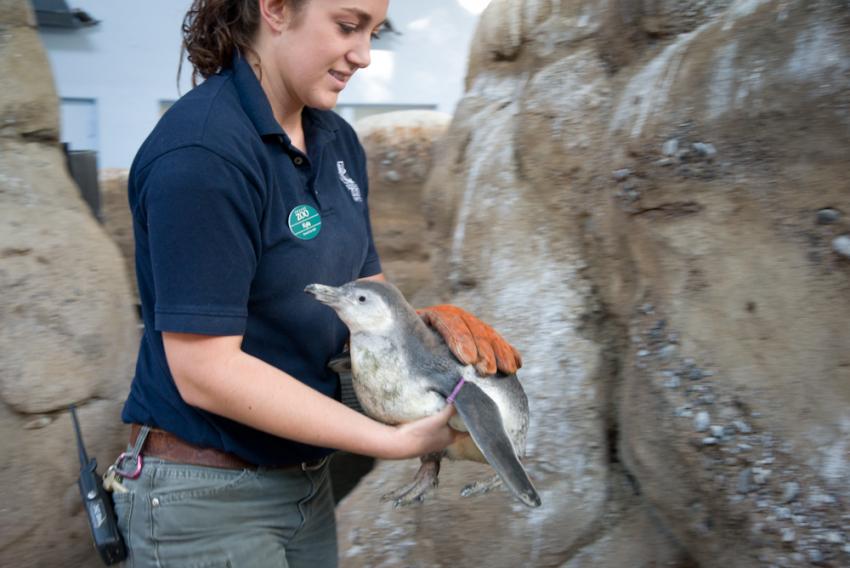 The five new Humboldt penguin chicks that hatched at the Oregon Zoo this spring have begun to emerge from their nest boxes and explore their surroundings, keepers say. The young penguins are easy to identify: they are gray all over and lack the black-and-white markings of adult Humboldts — notably the distinctive horseshoe-shaped band in the chest area.

Keepers have named the chicks after well-known conservationists, wildlife experts and scientists: 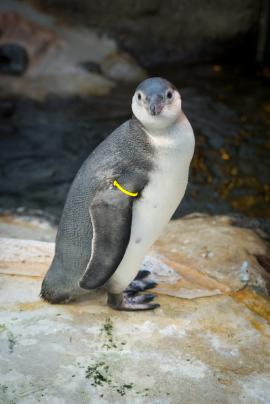 Visitors can see the young birds waddling over the rocky terrain and darting through the clear water of the zoo's penguinarium. (Penguins start swimming right away, and don't need lessons the way young river otters do.)

It is the first time in four years visitors are able to see penguin chicks in Portland. The zoo's breeding program had been on hiatus, in part due to renovations at the zoo's penguinarium. The penguinarium reopened to the public last November, following a much-needed upgrade of its water-filtration system, one of many sustainability improvements funded by the community-supported 2008 zoo bond measure. The upgrade saves 7 million gallons of water each year.

Humboldt penguins (Spheniscus humboldti), which live along the South American coastline off of Peru and Chile, are classified as "vulnerable" by the International Union for Conservation of Nature, and in 2010 were granted protection under the U.S. Endangered Species Act. Of the world's 17 penguin species, Humboldts are the most at risk, threatened by overfishing of their prey species, entanglement in fishing nets, and breeding disruption due to commercial removal of the guano deposits where the penguins lay their eggs. Their population is estimated at 12,000 breeding pairs.

Through its Future for Wildlife program, the Oregon Zoo has long supported Peru-based conservation organization ACOREMA's work to protect the vulnerable Humboldt penguin. ACOREMA monitors penguin mortality and works closely with San Andrés fishermen to mitigate the practice of hunting penguins for food. The group also trains volunteer rangers, reaching out to 3,000 students, teachers and Pisco-area residents a year to raise awareness about penguin conservation.