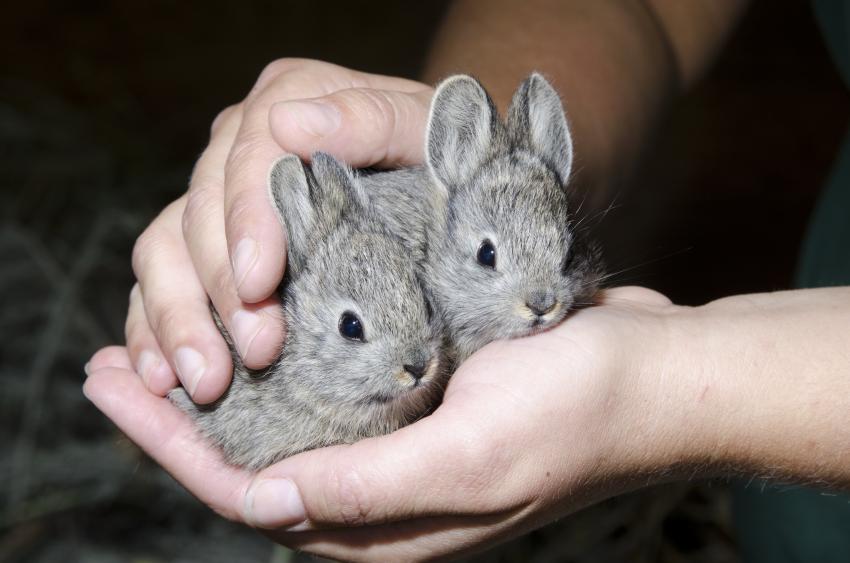 Oregon Zoo is honored by peers at national gathering of zoos, aquariums

The Oregon Zoo received two prestigious awards from colleagues at zoos and aquariums across North America — one for conservation work on behalf of imperiled Columbia Basin pygmy rabbits plus a marketing excellence award for promotion efforts surrounding Packy's 50th birthday. The awards were announced today at the Association of Zoos and Aquariums' annual conference.

"These awards are the highest honors in the zoo and aquarium world," said Kim Smith, zoo director. "Not only do the awards recognize our commitment to wildlife and conservation, but they show we've earned the respect of our peers. We are very, very proud."

The zoo's 12-year effort to save the endangered rabbit concluded in July 2012, when it released its last 14 breeding rabbits and their offspring at the Sagebrush Flat Wildlife Area in eastern Washington. Only 15 of these minuscule bunnies remained when the program began in 2000. In 2001, the Oregon Zoo became the first in the world to successfully breed pygmy rabbits. Since then, more than 1,600 pygmy rabbits have been born between the Oregon Zoo and its conservation partners at the Washington Department of Fish and Wildlife and Northwest Trek. Columbia Basin pygmy rabbits are now breeding successfully in the wild at Sagebrush Flat under close supervision by WDFW and the U.S. Fish and Wildlife Service.

"We're committed to conservation of many endangered species — large and small — and the fact is, these are the last Columbia Basin pygmy rabbits in existence," Smith said. "They're at the bottom of the food chain with the odds stacked against them. It's gratifying to know that the zoo and its conservation partners have made significant strides in helping their recovery."

The Oregon Zoo also received the AZA's Marketing Excellence Award, receiving top honors for its integrated marketing communications related to Packy the elephant's 50th birthday in 2012. The zoo's efforts to engage the community in this celebration resulted in a 60 percent attendance increase for its annual Elephantastic event and a huge outpouring of community support. Packy was knighted by the Royal Rosarians, named honorary grand marshal of the Rose Festival parade and featured on the covers of Northwest newspapers and magazines for a solid month. The zoo leveraged this unprecedented attention to communicate its growth over the past 50 years as a national leader in conservation, education and animal welfare. To help engage the community around this milestone, the zoo worked with Portland marketing agency Coates Kokes.
"Packy started it all for us," Smith said. "His birth was the cornerstone on which our elephant program was built, and in marketing his 50th birthday, we were publicizing more than just an event. This was about conservation, animal welfare and especially community."

"For a zoo to win multiple AZA awards in a single year is extraordinary," said Jim Maddy, AZA president and CEO. "I traveled to Portland last year to tell Metro Council just how special that achievement was. And this year the Oregon Zoo has won two more. Oregonians can be very proud of their zoo — it's universally regarded as one of the top zoos in North America."

Related links:
Learn more about the zoo's recovery efforts on behalf of Columbia Basin pygmy rabbits and other species