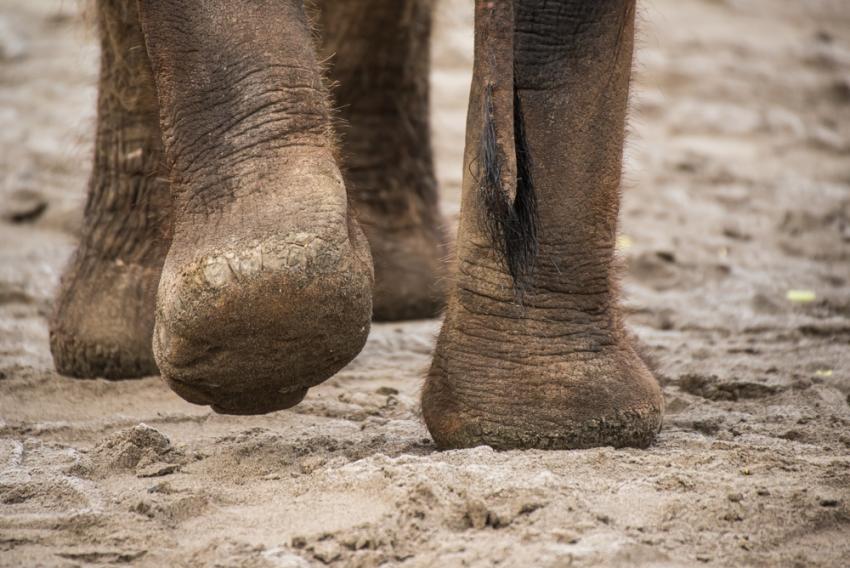 When Rose-Tu, Lily and the rest of Portland's elephant family ambled into a portion of their new digs at the Oregon Zoo this week, they were taking a big step into history — and, as it turns out, into a yard filled four feet deep with sand.

Construction of the $57 million Elephant Lands, the most ambitious project in Oregon Zoo history, reached a milestone Feb. 21, as crews completed work on what's now known as the Encounter Habitat, a portion of the large southern expanse adjacent to the zoo concert lawn.

Keepers began introducing elephants to this new area over the weekend, and visitors may catch glimpses of the herd through construction fences in the coming weeks, as the pachyderms saunter around, play in and plow through the sand.

It won't be just any sand either: Planning for the expansive, naturalistic Elephant Lands reached a truly granular level this past year, as designers researched, sampled and tested a variety of sands before settling on a just-right "Goldilocks" variety deemed optimal for elephants. 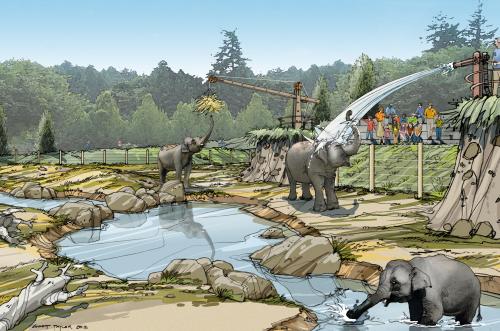 Find out how this habitat will provide a life full of choice for generations of elephant families.

"We started planning Elephant Lands by surveying what other people who cared for elephants were doing," said Bob Lee, the zoo's elephant curator. "We wanted to see what the best habitats in the world had to offer, and add that to our own experience and knowledge."

In 2012, Lee and other zoo officials visited Ireland's Dublin Zoo, which some years earlier had remade its outdated elephant habitat in a transformation similar to the one currently underway here.

"I was particularly impressed by the way they were using sand," Lee said. "It was several feet deep, and the elephants interacted with it in a lot of different ways — tossing it up with their trunks to dust themselves or digging up treats that the keepers had buried. We already had some sand in our outdoor habitat, but this stuff was much deeper and a different type of sand. We brought a sample back with to show our designers."

When Lee and the others got back from Ireland, they turned the sample over to the Elephant Lands design team, and project engineer Wayne Starkey took up the charge.

"The sand that they brought back had been sourced locally from beaches in Ireland," Starkey said. "So the trick for us was to find something similarly workable here. We were looking for sand that was readily available, would drain well and didn't have any sharp edges."

"We wanted to find the Goldilocks elephant sand."

Last fall, he visited CalPortland's sand plant in Vancouver, where he looked at samples of local Columbia River sediment, washed through screens of various sizes to ensure a uniformity of the grains.

Starkey zeroed in on three varieties: masonry, a finely processed sand that, as the name implies, is used mainly for stonework; a coarser type that was better for drainage; and a sand referred to as USGA topdressing, used in maintaining golf courses.

"We wanted to find the Goldilocks elephant sand," he said. "The sand that was 'just right.' First, I went outside and watched the heavy equipment rolling over the different varieties. I wanted to gauge how well it would drain."

The fine masonry sand didn't pass the drainage test, so Starkey was left with two choices; the next step was to elephant-test them. He brought in one transfer load (about 26 cubic yards) of the coarser sand and one transfer load of USGA topdressing.

"We tried each variety out in different sections of the back elephant yard," Starkey said. "Lily and big brother Samudra were playing 'King of the Mountain' quite a bit. Our animal-care staff found the topdressing variety to be the most elephant-friendly, so that's what we went with."

Starkey said filling the Elephant Lands habitat — including all of the indoor elephant areas — to a depth of not less than four feet will require 15,000 cubic yards of sand. 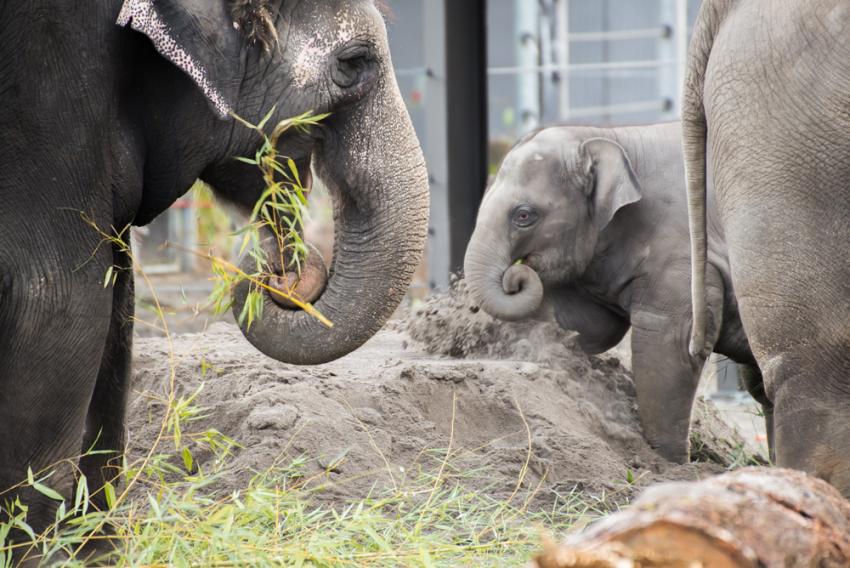 While Lily, Samudra and the others obviously enjoy romping in piles of the stuff, this "true grit" is not merely intended to facilitate play. The sand's higher purpose is to cushion and protect elephants' feet, which have evolved to support their enormous weight over a variety of natural terrains. Maintaining healthy feet among elephants is one of the most important tasks for animal-care staff. And — as with most things elephant-related — it is an area in which the Oregon Zoo has led the way.

Older exhibits, particularly those constructed in the 1950s and '60s, featured a lot of concrete, which is easy to clean and disinfect but can lead to foot problems in elephants. The Oregon Zoo pioneered the installation of elephant-friendly surfaces in the early 1990s and 2000s, retrofitting its Eisenhower-era facilities with natural substrates outdoors and 2-inch-thick rubber flooring inside.

In 1998, the Oregon Zoo hosted the first professional conference on elephant foot-care practices, convening veterinarians and elephant experts from around the world. Conclusions and recommendations from this conference were compiled in The Elephant's Foot (Iowa State University Press, 2001), which now serves as a manual for zoos across the country. More than 40 of the foremost authorities on elephants and their feet — including Oregon Zoo veterinarian Mitch Finnegan and vet technician Margot Monti — contributed chapters on topics ranging from foot anatomy to treating ailments to nutrition, maintenance and record-keeping.

"We've learned a lot about caring for elephants since Packy was born," Lee said. "And we're grateful for the chance to put all that knowledge into this new habitat, which is going to make the lives of all the elephants so much better."