African lion cubs venture out with dad for first time

Proud father of the pride now spending time with his cubs

He's a 500-pound mega-carnivore capable of pulling a buffalo to the ground, but Zawadi Mungu now plays a new role: cat toy.

Last week, the male lion ventured outside with his trio of energetic cubs for the first time, and demonstrated a surprising tolerance for a flurry of pint-sized attacks on his mane, tail and patience.

"The cubs rushed him as soon as they saw him."

The cubs were first introduced to their dad in their indoor den a few days earlier.

"We were confident that Zawadi would be tolerant of his cubs right away, and we're glad we were right because the cubs rushed him as soon as they saw him," said Laura Weiner, lead Africa keeper. "At first he was surprised but as time passed he grew more patient. A few days later, he was grooming them."

Outside, the cubs were less bold in their initial approach, as Zawadi towered over them from the top of the Predators of the Serengeti habitat. The cubs' mother Neka, and the pride's other female Kya, were close by.

"Within minutes he had five female lions swarming him, and I think all of that attention must have been overwhelming because he quickly jumped onto a boulder," Weiner said.

A video from that first outdoor encounter shows Zawadi holding his place on the boulder as the cubs repeatedly showered him with attention. The pride has continued spending time together outdoors, where they've also shared meals. The cubs—now ten times their birth weight—rarely nurse.

Keepers say lion cub Zalika—who had a mild temperament in her infancy—is especially playful with Zawadi, jumping on him and biting his mane.

Visitors can see the lion family on days above 45 degrees. 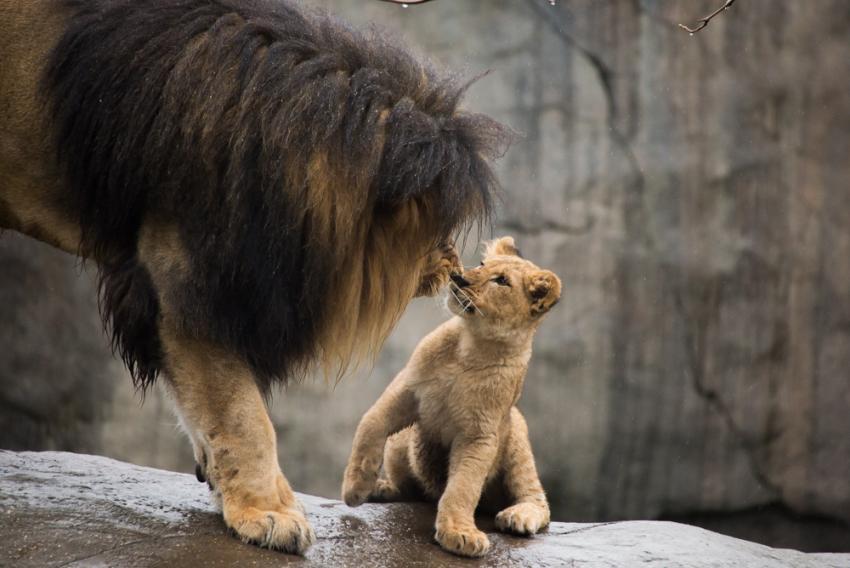