Move over, Grumpy Cat. A new grouchy feline is taking over the Internet, and — based on his size, demeanor and species — he seems to have assumed pride of place. 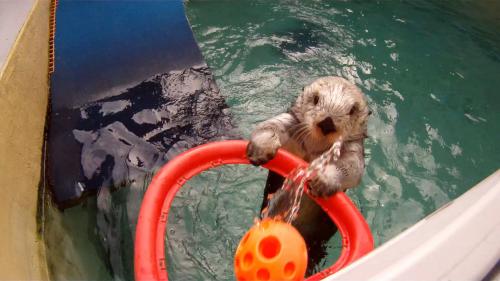 In a video released by the Oregon Zoo last week, Zawadi Mungu, a fearsome 500-pound African lion, ventures outside with his energetic cubs for the first time, inviting a flurry of pint-sized attacks on his mane, tail and patience. In less than a week, the video has logged more than a million views on the zoo's YouTube channel.

"We were confident that Zawadi would be tolerant of his cubs right away, and we're glad we were right because the cubs rushed him as soon as they saw him," said Laura Weiner, senior keeper for the zoo's Africa section. "At first he was surprised, but as time passed he grew more patient. A few days later, he was grooming them."

Weiner is a little surprised by all the attention that's been coming Zawadi's way, but says she's grateful for the chance to highlight African lions and raise awareness about their plight in the wild.

"Just two decades ago, lions were plentiful in much of Africa," she said. "But today they are vanishing at alarming rates. Hopefully, we can start a new chapter in lion conservation."