At 52, 'elder statesman' Packy has his cake, eats it too 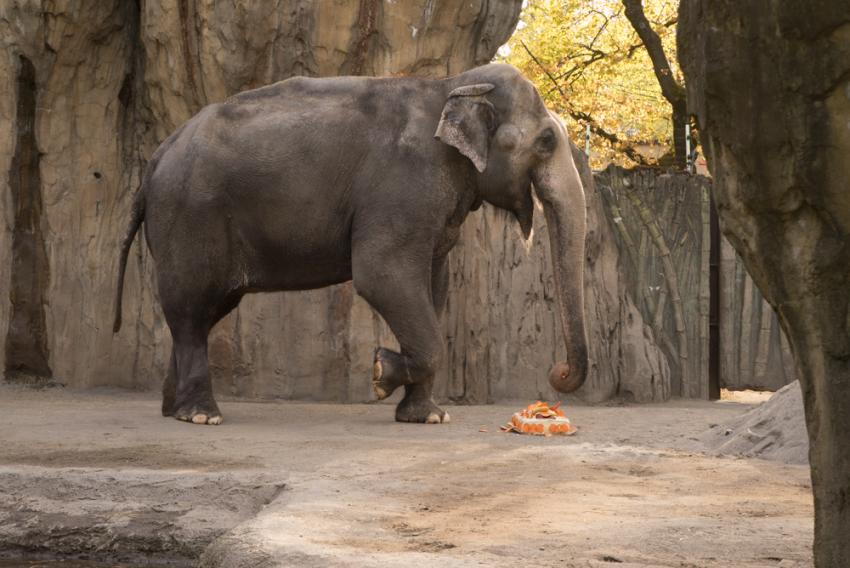 Packy, the oldest male Asian elephant in North America turned 52 today, and keepers presented the six-ton senior citizen with a cake to match the occasion: a 40-pound whole-wheat confection, frosted with buttercream and topped with carrots, bananas, apples and sweet potatoes.

"Packy has slowed down a bit in his old age, but he wasn't about to miss out on his cake," said Bob Lee, the zoo's elephant curator. "He strolled out very leisurely today and looked very much the elder statesman, which you'd expect from the continent's oldest male Asian elephant." 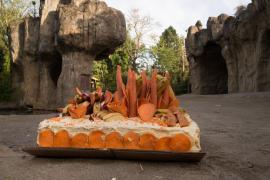 While Packy's approach to the cake was slow, Lee said, he didn't pause to appreciate the artistically rendered topping — with intricate flowers assembled out of sweet potato and apple slices, and carefully arranged carrot and banana "candles."

The zoo's executive chef Paul Bosch, who prepared the cake, takes no offense though.

"As long as he enjoyed eating it, that's all the thanks I need," Bosch said. "It's always a little intimidating to cook for a celebrity. It was a pretty simple recipe, and — except for the five pounds of butter in the frosting — pretty healthful: whole wheat flour and some of his favorite fruits and vegetables."

And if five pounds of butter sounds like a lot, keep in mind that Packy weighs more than 12,000 pounds.

"For a person weighing 200 pounds that would be like a third of a teaspoon," Bosch said.

"At his age, we just want to give Packy the most comfortable life we can," Lee said. "His toughness always impresses me. Sometimes it's easy to forget he's a geriatric elephant."

Zoo veterinarians Packy's health is generally good for his age, and are currently working with USDA experts to plan a new course of treatment for combating the elephant's tuberculosis, first discovered last July. Though he has shown no signs of illness from the TB, treating him has proved challenging, vets say.

"Packy's advanced age is one thing we take into account in coming up with his treatment plan," said zoo veterinarian Tim Storms. "Just as with humans, the effects of these medications vary from patient to patient, and Packy seems to be more sensitive to one of the drugs. We're starting a new regimen this week, and we hope this is the one that works for him."

Packy's son, Rama, diagnosed with TB last May, is well into his regimen and has had few problems with treatments, according to vets.

In 1962, Packy became the first elephant to be born in the Western Hemisphere in 44 years, and he's held a special spot in his fans' hearts ever since. Packy's birth also helped scientists better understand elephants and opened the door to a new era in elephant welfare.

Packy arrived shortly before 6 a.m. on April 14, 1962, and news about the 225-pound baby spread rapidly. Newspapers and radio stations around the world announced the birth, and Life magazine covered the event with an 11-page spread describing "The Nativity of Packy." Gifts flooded the zoo — everything from gold-plated safety pins to hand-knit baby clothing — and visitors flocked to see the new pachyderm. See vintage color footage from the time of Packy's birth.

"Packy's birth started it all," Lee said. "The focus on elephant welfare, the knowledge about elephants. We've learned so much about this species since he was born, and we're grateful for the chance to put all that knowledge into the new Elephant Lands habitat."

Elephant Lands — a sweeping expansion of the Asian elephant habitat that will quadruple the elephants' space and dramatically enhance their daily experiences — broke ground last June. The entire habitat, which will be four times larger than the current one, will be completed in the fall of 2015.

To keep the herd comfortable during this time, animal-care staff and construction managers devised a plan to gradually expand the elephants' accessible space in phases. The project reached a big milestone in late February as crews completed work on what's now known as the Encounter Habitat — a sandy field in the southern portion of the habitat, adjacent to the zoo concert lawn.

On Saturday, more than 8,000 people attended Elephantastic, the zoo's annual salute to pachyderms, held each year on or near Packy's birthday. With work on the expansive news Elephant Lands habitat in full swing — and much of the zoo's eastern side a construction zone — visitors got a sneak peek at what lies ahead for Portland's famous elephant family. The zoo also provided information about the 96 Elephants campaign to combat the illegal ivory trade, and collected more than 450 signatures on a petition asking Congress to enact a moratorium on domestic ivory sales.