Zoo elephants won't know where to find their next meal

Soon the Oregon Zoo's famous family of elephants won't know where their next meal is coming from. And that's a good thing, animal experts say.

"In Southeast Asian range countries, elephants can spend up to 16 hours a day searching for food," said Bob Lee, the zoo's elephant curator. "They're eating throughout the day, getting lots of exercise — that's the kind of experience we thought about as we designed the new Elephant Lands habitat here at the zoo."

"This will not only keep them moving and exercising throughout the day but it should also provide great mental stimulation."

To help encourage natural foraging behaviors, Lee said, the zoo took inspiration from a species that, like the Asian elephant, has a relationship with humans spanning millennia: the horse. In the equestrian world, automatic feeders have long given horse owners a convenient way to deliver multiple feedings per day, simulating the horse's natural grazing patterns.

The feeders are equally adapted to suit elephants' needs. A drop-down door lets animal-care staff stock each feeder with separate portions of hay, browse or other snacks. Each portion is then released according to a pre-programmed timer — and drops, vending-machine-style, onto a custom-made platform that the elephants can access with their trunks.

But unlike horses, which typically receive their hay at regularly scheduled times, the zoo's elephant family won't know when — or where — their food will drop. More than 20 timed feeders, strategically placed throughout the expansive Elephant Lands habitat, will be programmed at unpredictable intervals to encourage natural foraging behaviors.

"If they come upon a feeder that hasn't released anything yet, they'll have to move along to the next one, and maybe the next one after that," Lee said. "This will not only keep them moving and exercising throughout the day but it should also provide great mental stimulation."

Keepers may find themselves equally engaged. With so many feeders spread out over more than six acres — each needing to be filled and programmed to release food at random, unpredictable intervals — feeding the zoo's elephants will become more labor-intensive and will require more thought than ever before.

"It will be worth it though," Lee said. "We've learned a lot about caring for elephants over the past 50-plus years, and we're grateful for the chance to put all that knowledge into this new habitat, which is going to make the lives of all the elephants so much better." 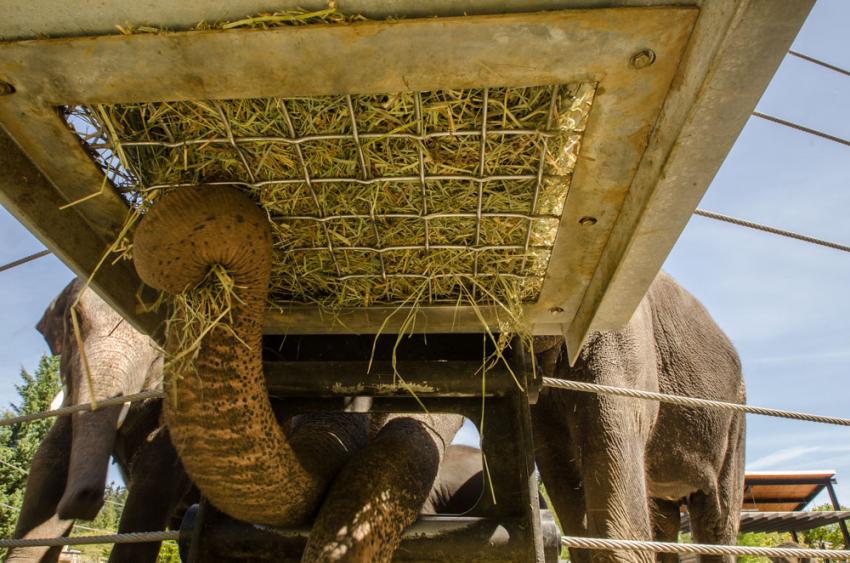 A recent study assessing the welfare of elephants in North American zoos found that increasing an elephant's exercise time, providing more frequent meals, and having unpredictable timing of those meals correlated with improved body condition.

"Our plans for Elephant Lands were already in motion when those results came out," said Oregon Zoo elephant curator Bob Lee. "But it was great to get that scientific validation for what we're doing."

Elephant Lands — the fourth of eight major projects funded by the community-supported 2008 zoo bond measure — is a sweeping expansion of the Oregon Zoo's Asian elephant habitat that will quadruple the animals' space and dramatically enhance their daily experiences. Work on the new habitat, which has been carefully sequenced to gradually expand the elephants' accessible space in phases, will be completed in the fall of 2015.

Related links:
Learn how the Oregon Zoo Foundation’s Campaign for Elephants will fund education- and conservation-based activities at Elephant Lands