Zoo polar bears will use 'slinky' to warm up elephants 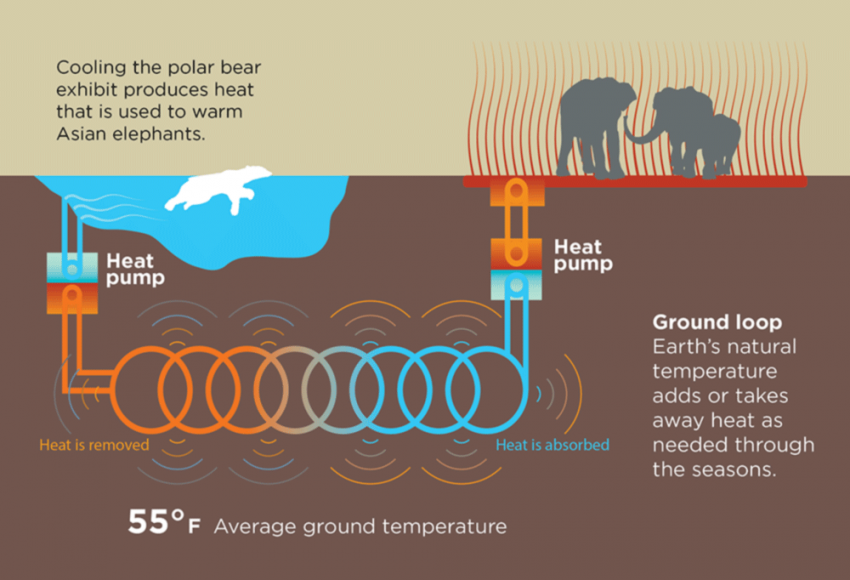 Polar bears like it cool, elephants like it warm and the Oregon Zoo likes it sustainable. Now, zoo construction crews have begun work on a project that will let these two endangered species keep each other's thermostats at comfy levels via an innovative high-tech system buried 12 feet underground.

There's also a "Slinky" involved. It's called a geothermal loop.

"Gradually, we may eliminate the need for fossil fuels at the majority of buildings and exhibits at the zoo."

"Essentially, this system works the same way as your household refrigerator," said Jim Mitchell, zoo construction manager. "The condenser that cools the coils in your refrigerator produces heat, which is expelled away from the coils with a fan. Our system has just added another step: capturing that heat for use elsewhere rather than blowing it all away."

Heat is created as a byproduct of cooling the polar bear swimming pools at the zoo. And rather than just expel that heat, the geothermal system will direct it through rows of Slinky-like coiled pipes buried deep in the northern section of Elephant Lands.

The ground maintains a constant temperature, insulating the pipes. Then, when it's time to crank the thermostat, pumps connected to the system will deliver heat to Forest Hall, the 32,000-square-foot indoor portion of Elephant Lands.

The geothermal loop and other energy-efficient design systems are expected to cut Elephant Lands' energy requirements in half, reduce greenhouse gas emissions by 40 percent and serve as the primary heat source for what will be one of the country's largest indoor elephant facilities.

Eventually, other renewable sources of heat will be fed into the geothermal system. While it won't be readily apparent to visitors, the roof at Forest Hall will feature a huge array of solar panels.

"Gradually, we may eliminate the need for fossil fuels at the majority of buildings and exhibits at the zoo," Mitchell said.

"The beauty of this system is in how it gives elephants choice," said curator Bob Lee, who oversees the zoo's elephant program. "Most of the time, the elephant family will be able to move freely indoors and out, and we'll be able to sustainably maintain a comfortable temperature for them."

An elephant-sized "air curtain" separating Forest Hall from the outdoor areas will maintain a constant, comfortable indoor temperature for pachyderms while providing access to the rest of Elephant Lands' 6.25-acre spread.