In a state famous for its timber industry, a new form of lumber is making its debut at an Oregon Zoo construction project.

A visitor center at the Oregon Zoo's under-construction Elephant Lands habitat is believed to be the first in Oregon to use cross-laminated timber.

Made from planks of wood cross-hatched together into large sheets, the strength of cross-laminated timber offers flexibility in design not achievable with standard wood construction. 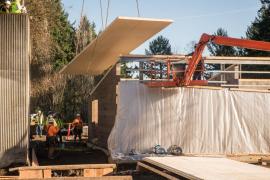 The design of the Elephant Plaza building features a cross-laminated timber roof. The strength of the material and its use in the design allowed for the elimination of 20 percent of the steel beams originally needed to support the standard wood decking plan.

In addition to its strength, the material's sustainability potential has many excited about the growing industry.

Steel and concrete are expensive and take a lot of energy to produce, said Emily Dawson, an architect at SRG and designer of the facility. When thinking about the life cycle of a building, and how much energy goes into the making of it, lumber, which stores carbon, can have a positive carbon impact.

Cross-laminated timber can reduce carbon emissions in the construction industry in several ways, including storing carbon in the wood and offsetting emissions from conventional building material, according to the federal government.

Because cross-laminated timber is comprised of smaller timber manufactured into large-scale sheets, it can incorporate smaller pieces of wood, including timber created in fire prevention work such as forest thinning and clearing of damaged trees.

The new exhibit was designed with not only sustainability in mind but the natural family-focused lifestyle of elephant herds, according to Jim Mitchell, Oregon Zoo construction manager.

"Our main task in designing and building is to keep the animals in mind first," Mitchell said.

Elephant Lands — the fourth of eight major projects funded by a community-supported 2008 bond measure — is a sweeping expansion of the zoo's Asian elephant habitat that will quadruple the animals' space and dramatically enhance their daily experiences. Work on the new habitat — which has been carefully sequenced to gradually expand the elephants' accessible space in phases — will be completed in the fall of 2015. The Elephant Plaza and the north habitat sections are expected to open to the public at the end of April.